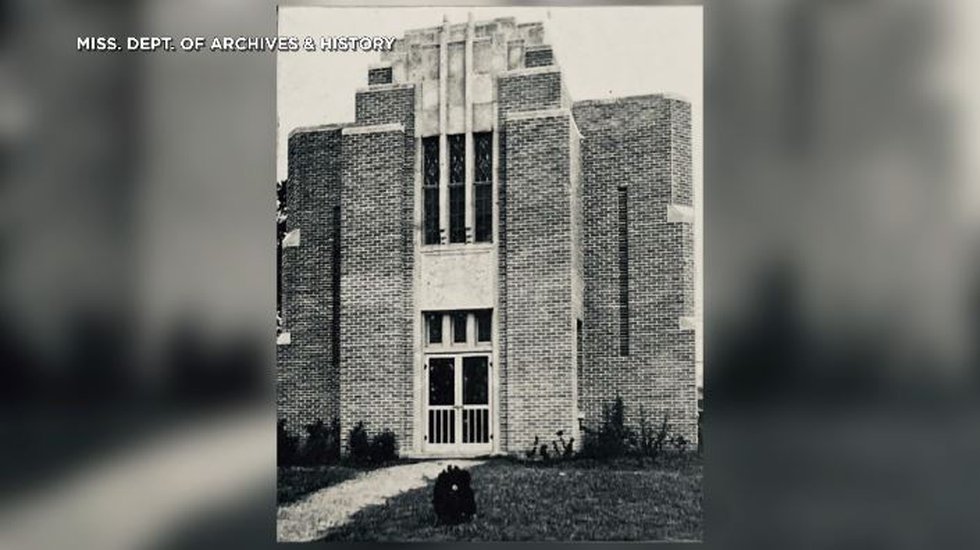 A distinctive building has a fascinating history

JACKSON, Miss. (WLBT) – For nearly a century, a strange structure has overlooked what was once the main road between Jackson and Canton.

Most people passing by today have no idea what it is or that a dozen people once lived there.

The building was designed by famed architect Jackson NW Overstreet, who later designed the Bailey School.

Overstreet’s design was meant to evoke images of cathedral-style radios from the time it was completed in 1929 on North State Street between present-day Briarwood Drive and Beasley Road.

This theme was apt, as the building housed the transmitter for WJDX, Jackson’s first radio station.

The studio was downtown in the Lamar Life Insurance building, but the signal came from State Street, radiated from two towers on the property with a wire stretched between them.

Algie Broome bought the building in 1984 and quickly learned of its history.

“The building is an Art Deco representation of an old cathedral radio, and the upstairs window to the front was a decorative leaded glass window, and which simulated the speaker grill of the radio”, he explains.

One of the radio station’s first employees explained to Broome how they set up the equipment.

“He told me he had transported the transmitter with a mule and a wagon from the depot here in Tougaloo, and that it had been sent from Birmingham by train.”

At that time, an engineer had to live on the property. Thus, the second floor of the building served as his apartment. That first engineer was Percy Root, hired by WMC in Memphis to live in the new building and get the station on the air.

Ruth Root Benton, who now lives in Brandon, is one of ten Percy Root children who lived in the two-bedroom, one-bathroom apartment with their mother and father. She lived there until the early 1950s.

“When my brother Jack was born in 1940, I remember my mother bringing him home, and I think, Here’s just another one,” she laughs.

With dad working downstairs on the transmitter, mom and all those kids made a house upstairs. Benton remembers a happy childhood there.

“Not everyone wakes up to the NBC chimes, but we did.”

Given what the structure looks like now, it’s hard to imagine, but Lamar Life, who owned the station, made sure the transmitter building was state of the art.

“We had radiators for heating,” Benton recalls. “We had running water. It was very comfortable. I had friends who still had outbuildings and cooked on wood stoves.

The Root family took up residence until WJDX swapped their 1300 frequency for the more powerful 620, then owned by WRBC. The Roots had to move to transmitter 620, located in Rankin County.

WRBC later added a studio to the State Street site – a white cinderblock building grafted onto the facade of the Overstreet original. It darkens the ground floor to this day.

Scott Allen is the current owner. He was primarily interested in the new building next door, where he moved his business, A-Plus Signs and Creative. But he also likes the old radio building.

“There probably isn’t a week that goes by that I don’t get someone to write to me or see an article that was shared years ago that has kind of a different twist on the story,” he says. . “So that’s kind of the gift that keeps on giving. That was really cool.

Allen plans to do what he can to restore it.

The concrete and yellowish brick have held up pretty well over the past 93 years. Now he just has to tear down the white building in front so you can see him again.

“I want them to take that facade down and I want it on the National Historic Register,” she says. “I think it was really unique for its time.”