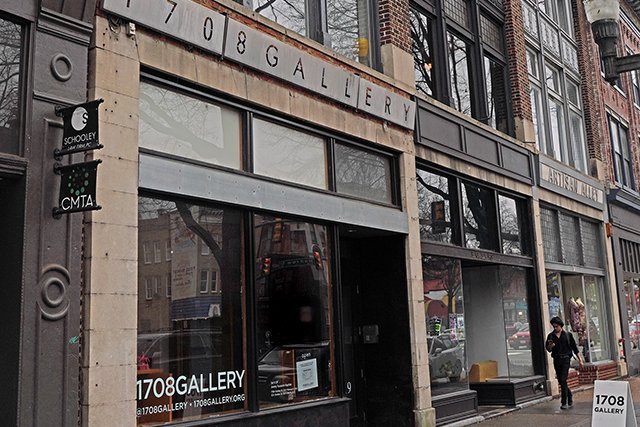 A future of art – richmondmagazine.com

Let’s say it’s circa 1978. You manage to participate in a raucous art opening at the original location of 1708 E. Main St., Shockoe de 1708 Gallery. Maybe a thousand people came that night. In the middle of the activity, you suggest to one of the founding artists that they had created an organization that would endure more than four decades and, from 2021, owning a building on Broad Street.

A head-shaking laugh would have probably answered your assertion.

Now, after years of effort, thought and fundraising, the 1708 artist has purchased 319 W. Broad St. for $1.1 million. This is a milestone in the gallery‘s history that secures a future for one of the oldest artist-run spaces in the country.

Sculptor and fabricator Tom Chenoweth, one of those present at the creation of the gallery, observes: “I don’t think any of us could have imagined that the place would still exist so long afterwards. Joe Seipel, another co-founder, artist and retired Virginia Commonwealth University professor and arts administrator, laughs at the thought. “We weren’t thinking 40 years ahead. At best, maybe a month or two. We were trying to pay the rent.

Paying rent is the constant frequentation of artists and the places where they exhibit. Acquiring property is often not part of the picture. For creators, earning enough to pay for the creation of the work and then bringing it to the world through exhibitions that can lead to sales is a never-ending concern. Non-profit spaces strive to secure grants or gather patrons who support the gallery’s mission. Sales can be part of the equation, as can fundraising events such as auctions and specialty programs. The cycle can be exhausting to make the art possible while supporting the places where the public encounters the work.

The gallery left Shockoe in 1993 to escape rising river and rents. At the second location, 103 E. Broad St., the gallery has remained a venue for contemporary works and has participated in the revival of downtown Broad through the popular First Fridays Art Walk.

When the building’s owner, artist James Bradford, died intestate, it necessitated another move, to the three-story 319 W. Broad, in September 2001. This move was made possible in large part by the owner of the building, arts supporter and promoter. Tom Daddy. Dad also credits conversations with longtime gallery friend Jay Barrows.

“Jay should get some credit here,” Dad said. “It was a matter of timing; they were on life support for a bit. I had this building. Jay said, ‘Why don’t you renovate the building, and they can be your tenant?’ Dad adds, “And besides, it’s 1708!” It is an important part of the city’s cultural life. These are my friends.”

Barrows recalls this crucial moment with 1708 bearing construction problems and financial factors which weighed heavily on the gallery.

“Tom had bought the current building with his brother-in-law, and they were trying to decide what to do with the lower floors,” Barrows recalls. He and dad mused about 1708 moving into the space with a 10-year lease making the move more affordable and giving them a better location.

With the apartments upstairs, the layout made sense.

“The idea was that they would become a healthy organization and eventually own the building,” Papa says. “It just took a little while.”

The gallery was inaugurated during the annual Wearable Art event (1998-2007), which was paired for three more years with the adventure In the light illumination and art festival that began in 2008.

Through these and other projects, 1708 has extended its reach to the wider Richmond community and to regional and national artists for presentation. Guest artists often come to Richmond for several days. This aspect of time limitation is set to change as the gallery building includes three large three-room apartments that will become work/live studios.

Executive Director Emily Smith sits at the gallery window on a sunny afternoon to discuss the great rendezvous of 1708 as dog walkers and passers-by wave. “We definitely have a neighborhood here,” she says. Of these upstairs apartments, now under separate management until the gallery can begin its transition, Smith says, “This is a huge opportunity. They are beautiful spaces with massive windows and light to the north and south. Couldn’t be better for an artist.

She reflects on the benefit of the gallery’s opportunity to offer extended residencies, “instead of them landing here on a Monday, staying three to four days to settle in and then leaving.” The gallery has established a relationship with the nearby Linden Row Inn, where since 2009 offsite exhibitions have been held.

Smith explains how the idea of ​​buying the building coalesced around the time of the gallery’s 40th anniversary celebration in 2018. How do you properly commemorate this accomplishment? A big party? An event? InLight added considerable power to the 30th anniversary of 1708.

“And in true-to-form 1708 fashion, it happened organically,” Smith says. “I mean, that’s how the best things happen, not ‘This is what we do’ and boom.”

The two main purchase decision drivers concerned the sustainability of the gallery in the future, with monthly rates increasing and reaching the end of the second decade of the gallery’s lease. The board and guests discussed whether to stay or seek another space.

Then came the realization of how the apartments could be used.

“Our future program will build on a national application process and provide living and working spaces and resources for artists to live and create art in Richmond,” says Smith. “They will be informed by their stay here”; the duration may vary depending on the project and the artist, but this is to be determined. “It’s important to note that our goal is to have a fully funded program – artists will live rent-free and receive living and working allowances, basically paid to be here so they can take time off on any what job they have.”

Molly Dodge, who has held various positions on the gallery’s board and as past president, says the purchase of the building “came out of a conversation we’ve had for a long time. And buy it from Tom Papa, who understood our challenges and also recognizes the energy we bring here.

Smith cites Dodge for guiding the process while Dodge talks about the benefits to the gallery. As for the apartments, “we can do them all at once, one at a time, leave them as they are. There is flexibility to implement this program at a pace that truly allows us to be thoughtful and diligent in our mission.

The push to seek property finally came from a deluge.

At around 2 p.m. on Sunday, November 1, 2020, Smith received a call from the gallery’s alarm company about the motion detector going off. The news came as a perplexity for the director.

“And so I came down here,” Smith recounts, “and there’s four fire trucks and people on the sidewalk, tenants standing around, and furniture out, and a big moving truck.”

She approached the fire department to inquire about the situation. Then she turned to see the large front window. Smith saw torrents of water pouring through the ceiling of the gallery. She then rushed into the building, despite firefighters’ objections, “‘Oh, you’re trying to arrest me,'” she recalled thinking. She began moving the happily wrapped work removed from a recent exhibition, and after calling curator Park Myers and operations director Christine Lockerby, Smith said, “I cried. I didn’t know what else to do.

A tenant who is moving would have caught a piece of furniture against the sprinkler activator. The insurance covered the damage, including the ruined floor. A few lighter moments happened when ServPro came in for remediation. A representative from the gallery guided the workers into the basement, where, Smith says with a light laugh, “We had to tell them, ‘This pile of wood is important to us, we must save it. This pile of wood can go. ”

Planning for InLight was aided by large dehumidifiers in bare space. “It felt like, in a year of real trauma, it was our somewhat superficial trauma, but trauma nonetheless,” Smith says. “We had to navigate to get back to some sort of normalcy.”

At that point, Dad suggested to Smith that it might be time to move on to ownership.

“Initially, we thought we would kick off the fundraising campaign and do it all at once,” Smith says, “but it added a sense of urgency.”

After the conclusion of the purchase contract, dad and his family made a significant contribution. The gallery intends to raise $2 million, $1 million for the building, half a million for operations and reserves, and the other half a million in start-up funds for the residences.

“It seems like a big amount,” Smith says, “but once you start investing those dollars in practical things for the building, you realize that’s not the case.”

The gallery’s annual operating budget is approximately half a million dollars.

Smith reflects, “It’s a drop in the ocean compared to, say, the Virginia Museum of Fine Arts.”

Ownership involves different responsibilities, including accessibility. “Now we have a giant building with a staircase,” Smith says. “We will need to get a lift and also look at accessibility for any potential performers. We don’t want any obstacles to what might happen upstairs – financially or logistically.

Ownership also brings benefits that the gallery previously lacked, including requirements for grants when tenure and ownership are required. After more than four decades and much planning, the future of 1708 is secure. The purchase became official on December 6, 2021.

The gallery’s current president, Caroline Wright, says the purchase of the building represents a commitment to the organization’s history. “The many important visionary artists who founded the gallery helped shape what we recognize as our contemporary art scene. We want to continue to encourage challenging and risky work. And launching a residency brings that mission to a larger and more meaningful scale.