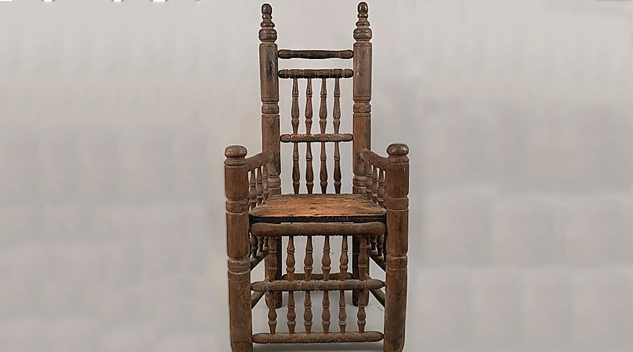 WOODBURY, CONN. – Art Pappas of Main Street Auctions & Estate Liquidators offered the contents of a longtime Woodbury antique dealer’s home and shop on July 10, including early American antiques, decorative arts, fine art, folk art and more. A rare 17th century Brewster chair in an antique finish with a wooden plank seat presided, winning an auction for $8,750, with bounty included. The throne-like chair featured strong rotation and spindles and its dimensions were 48 by 23 by 18 inches. Why is this style called a Brewster chair? The story goes that in the 1620s, shortly after the Pilgrims landed in England, cabinetmaker John Alden made a chair for William Brewster, a passenger on the Mayflower and the ruling elder of the Pilgrim Church. The chair was made of ash and was designed to look like a throne, befitting a man of Brewster’s importance. After Brewster’s death in 1644, a second chair was made. Brewster’s chair has survived and is on display at Pilgrim Hall in Plymouth, Mass. The second chair was discovered in the early 1900s by Wallace Nutting and is held in the collection of the Metropolitan Museum of Art in New York. More highlights of this sale will follow in a later review.