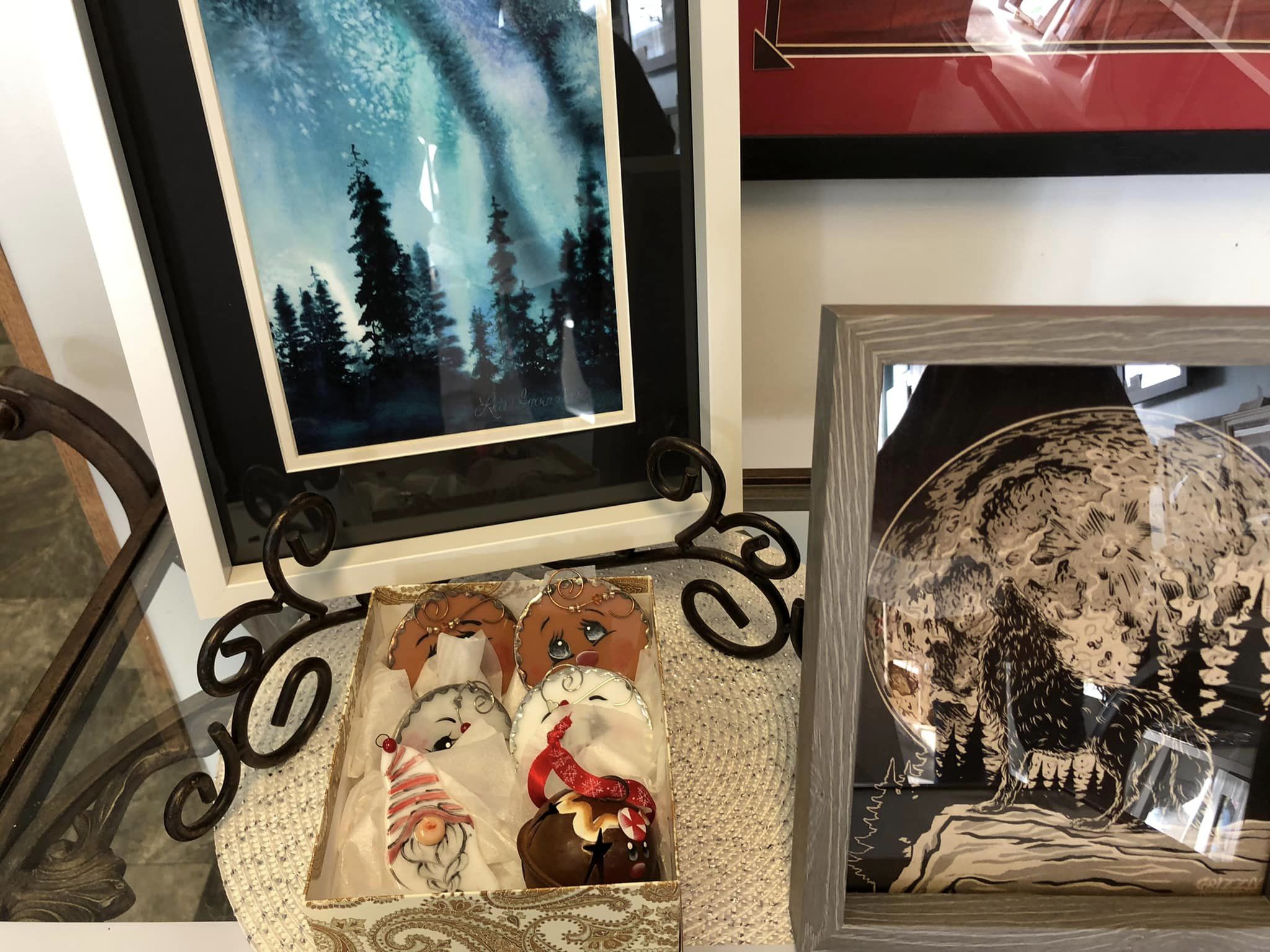 Proceeds from a silent auction at the Fine Line Art Gallery on Scott Street will help keep the gallery open and preserve the painted history of a small town for years to come.

The Fine Line Art Gallery is currently home to 13 local artists who pay a small monthly fee which allows them to exhibit and sell their works in the gallery which attracts both local and foreign interest. All proceeds from art purchases go directly to the artist, an arrangement that ensures artists are rewarded for their work.

For artists who don’t have a monthly subscription, they can pay a small one-time fee and pay a 20% sales commission to exhibit and sell their work. The gallery has been supporting local artists for almost 30 years.

Bright colors and neat strokes of paint portray the interests and livelihoods of a quaint small town in many of the paintings on display at the gallery. Additionally, laser photography, stained glass, sculptures, and many other art forms are featured.

The gallery’s mission is to nurture the visual arts rather than make a lot of profit. But keeping the doors open means keeping the expenses small.

At this year’s silent auction, which only runs until November 18, local artists have donated their artwork and dedicated all of their profits to help keep the gallery open.

“We’re on a bit of a shoestring budget,” said Emily Hyatt, one of 13 gallery members who has been an active volunteer at the auction.

“The funds will help keep the building open. We are a small gallery. We sell [art] there, but we also promote art within the community. That’s what we’re here for, just to have a nice place where people can go and see art and enjoy it.

Bidders are encouraged to evaluate a variety of art forms and to bid silently in writing. There is no auctioneer present, hence the name “silent auction”.

Hyatt donated his stained glass windows at the auction, and other local artists who donated their works include Hal Gerson, Jean Richards, Sheila Shaw, Bob McDonald and Ryan Daw, to name a few. -ones.

Hyatt said people donated more than just artwork at the auction. One of the items to be won is a decorated Christmas tree.

“It’s convenient because sometimes people are new to the community, you know, and it’s just an opportunity for them to have a tree totally ready to go,” she said.

Jean Richards, whom Hyatt has described as “our inspiration and our go-getter”, founded Fine Line Art Gallery nearly 30 years ago. She had been a member of a small gallery in Manitoba and wanted to create one for Fort Frances. She recalled a woman in the community who helped pay her monthly rent when she heard about Richards’ financial situation when the gallery opened.

“When I started, we had eight members. And I had a wife that I got to know, she always gave me $50 a month to help pay the rent because she knew there was only eight of us. [members] and we were really pinching pennies to keep it going.

“I was up to 17 members at a time and it was great. But then a couple passed away and four or five of them moved out. And now we have 13. But I think we’ll maybe -may lose one or two, so we need new members.

“There are a lot of artists in town but they don’t feel like joining a gallery is going to benefit them… As soon as they’re told they have to pay monthly, it almost scares them away. You know, I don’t think there’s a single member who doesn’t sell enough to pay a month’s rent. Everyone sells something. You may not be selling $85 a month, but most months you are.

She thought of a woman who visited the gallery and then left because the gallery wasn’t busy like other businesses in town. Richards noted that most galleries were like this, including galleries in big cities, which rarely draw large crowds on regular days.

When it comes to his gallery, Richards views things with optimism. “I’m sure we’ll manage,” she said.

Richards said the popular phrase “the struggling artist” is true because artists create paintings that don’t sell until much later. “And we always laugh when I say, ‘Oh, I guess I’ll be rich after I die.’ It’s a common joke among artists.

“Sometimes I say, ‘Oh, I’m going to paint this,’ and then you paint it and then you think, ‘Who’s going to want this? But you know, most of the time, whatever it is, it ends up selling. It may not sell immediately, but it will. Because everyone has different tastes and different desires. You just have to get the right person to like what you’ve done. Not everyone likes the same thing.”

Two of his paintings are in this year’s auctions – a laundry painting called “Blowing in the Wind” and a box of 20 assorted cards of original and printed paintings.

“Blowing in the Wind” is one of a series designed to show laundry around the world.

“I didn’t do all the trips. I did a few, but then my sister was in Portugal and then she was in Africa. Some of the others I’ve done [travel to] like I’m in St. Kitts and the surrounding area here,” Richards said, noting that the laundry painting from Africa has already sold out but the one from Portugal is still available at this time.

Her most memorable moment is the launch of Fine Line Art Gallery, she said.

“I mean, opening the gallery and having it running for that long is wonderful. How many people can hold out as long as me? Because there were times when I was like, ‘Oh, why did I do that? Will it work?’ But then you go through it.

On September 16, a day she will never forget, Richards was hit by a car around the corner from the post office, sustaining multiple injuries and weeks of physical therapy. Although she took time off from the gallery to recuperate, she confidently stated that as long as she was still around, the gallery would remain open.