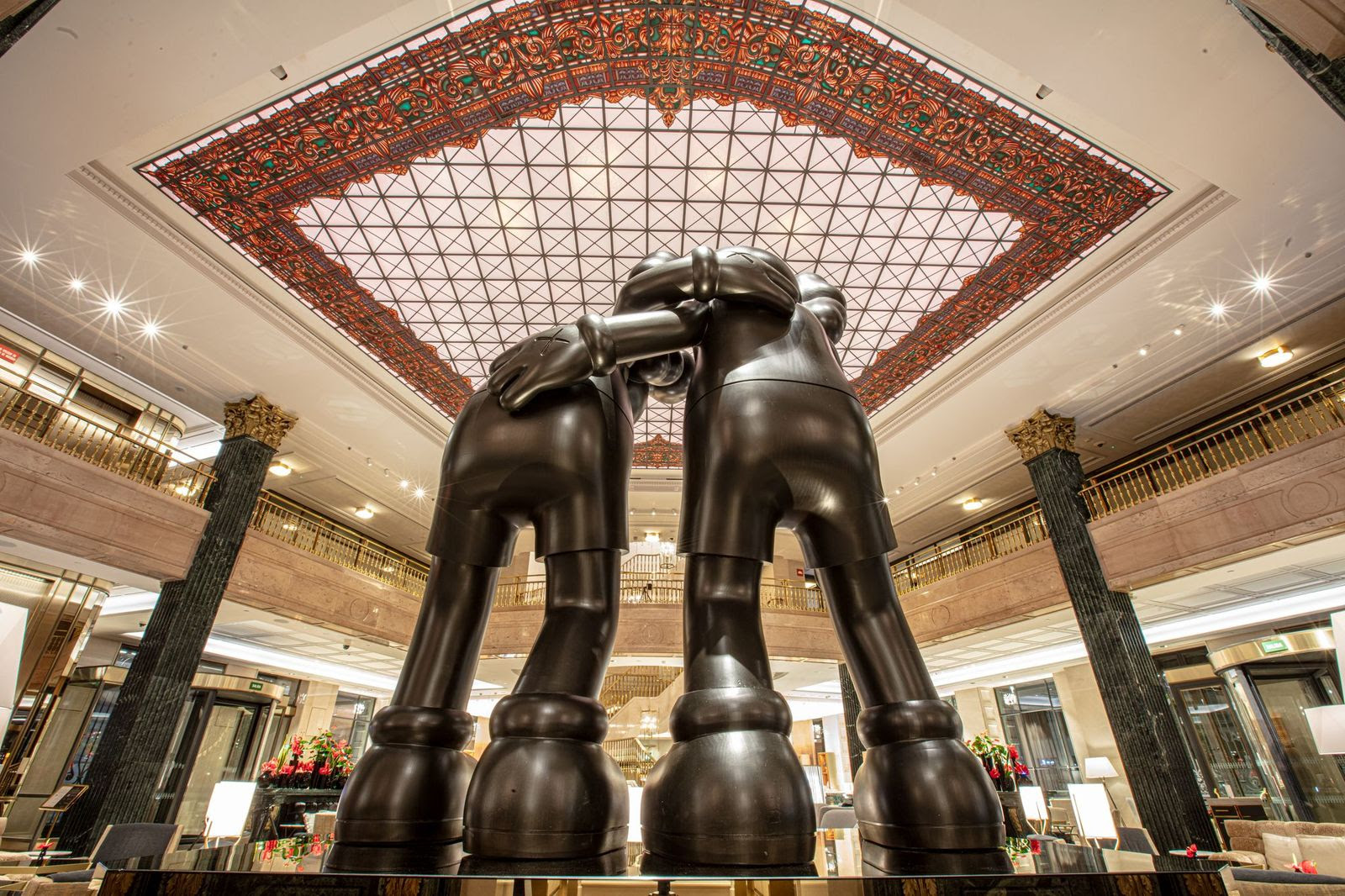 Art and gastronomy at the Four Seasons Hotel in Madrid

The sculpture of KAWS has been attributed to Four Seasons Hotel Madrid by Mark Scheinberg, founder of the global investment firm Mohari hospitality. Mohari is co-owner of the building Madrid Center Canalejas in which the Four Seasons Madrid Hotel.

Mark Scheinberg, founder of Mohari Hospitality, tells: “This iconic KAWS sculpture it is visually very contemporary, but represents traditional and enduring values ​​of collaboration, cooperation and mutual aid. This ultra-contemporary piece, by a Brooklyn graffiti artist, fits perfectly into this historic building in the heart of Madrid. a perfect contrast between the old and the new. I am delighted that guests and visitors to the Four Seasons Madrid have the opportunity to admire this impressive work.

According to the regional vice president and general manager of the hotel, Adrian Messerli, “We are proud to have such an impressive museum-quality sculpture by a world-renowned artist who becomes the center of attention of our now iconic lobby. People already come to the hotel just to see the new sculpture that complements the hotel’s spectacular art collection.

From his origins as a graffiti artist to New York in the 90s, KAWS has become an international name in its own right within the art industry, recognized for its exploration of themes of reinterpretation and appropriation deconstructive. His work, which ranges from cult figures to paintings, sculptures and public projects On a large scale, it is collected by connoisseurs and exhibited in the largest museums in the world.

New sculpture in the lobby brings an international touch that complements the existing art collection at the Four Seasons. The art curator Paloma Fernandez-Iriondo collected nearly 1,500 paintings, graphics, photographs and sculptures, all by Spanish artists, which are now on display throughout the hotel. As she explains: “To tackle the artistic project, it was necessary to recognize the history of the hotel buildings and their 19th century essence, but also to honor the 21st century and to show a commitment to the local community today.

Reflecting the historic architecture of the hotel, the more than 300 plaster reproductions of the Royal Academy of Fine Arts of San Fernando, which is located right in front of the hotel and the collaborative project with the Thyssen-Bornemisza National Museumundoubtedly two of the most recognized artistic institutions in Madrid.

Aiming to bring fresh energy and imagination, Fernandez-Iriondo sought out the work of emerging Spanish artists by organizing a competition in fine arts schools in Madrid, Malaga and Seville. In four years, more than 500 proposals have been submitted in the categories painting, graphic work, work on paper, photography, plaster work and sculpture. Finally, 75 proposals were selected and reproduced to decorate the rooms, suites and corridors. Some artists have also been commissioned to create specific works to liven up specific areas of the hotel, including Dani restaurant, the ISA restaurant and the Four Seasons Spa.

The second part of the plan: eat at Dani Brasserie

Dani Brewery is the last project of Dani Garcia. A proposal that bears its own name and which looks back on the emblematic career of the chef from Malaga. The restaurant has its own entrance on Calle Sevilla directly on the seventh floor of the hotel Four Seasons where he is. A rooftop with the most powerful views of the horizon From the capital. The chef has successfully presented projects in Madrid such as BIBO and Lobito de Mar.

Dani Brewery It is a place where creativity and technique coexist with a taste for traditional Andalusian recipes and the flavors that have marked his career over the years, enveloped in the undeniable duende of the creator of the “new Andalusian cuisine” at the beginning of the years. 2000s.

Open non-stop until midnight, the restaurant offers a breathtaking view of the city. Dani Garcia invites the guest to escape with its haute cuisine menu and to taste delicate dishes in a more relaxed way. Developments that evoke memories of their Andalusia native, new Andalusian cuisine, its passion for the flavors of the world, and its creativity and avant-garde technique that enhance the raw material in each preparation. A cuisine of contrast, whether in texture, temperature or flavor, but also nuances with subtle contrasts of ingredients that sublimate and soften.

Of the Dany It is a full menu and suitable for all tastes but without a doubt one of the best dishes presented there is the nitro (nitrogenous) tomato which you see in the video above. This one tricks the palate in a unique way into believing that you are eating a bite of some sort of futuristic food. It’s fun because the flavors differ in isolation but blend together impressively and the textures are out of the ordinary. You can’t stop visiting Dani Brewery! It is a mandatory stop. And the eternal after-dinners cannot be absent with the spectacular views that, as we mentioned, you have from the restaurant in the city. The service is impeccable.

Located in the heart of Madrid, on the corner where the emblematic Calle de Sevilla and Calle de Alcalá meet, Four Seasons Madrid Hotel It is part of Centro Canalejas Madrid, a new hotel, residential and commercial complex that brings together seven historic buildings, the oldest dating from 1887. Mohari Hospitality acquired a 50% stake in Centro Canalejas in February 2017 with the developer OHL Desarrollos. Since then, the resort has undergone a major renovation, with all original buildings fully restored and reimagined in a modern and sleek style, open to the public in September 2020.

Disclaimer: This article is generated from the feed and is not edited by our team.

Focus on e-commerce: why high-end luxury goods are adopting NFTs