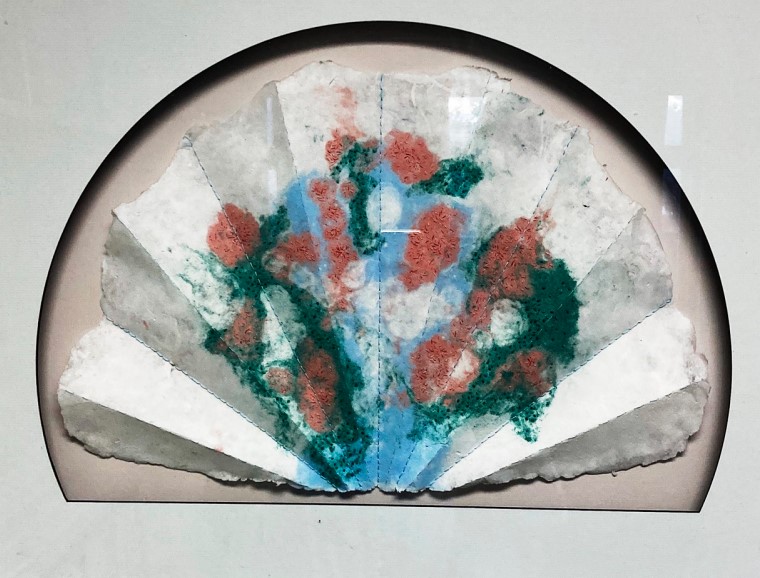 In May 1987, the Art Center of Estes Park opened its doors, displaying the artwork of the 21 local artists who worked together to plan and build the center. Then on June 12, 1987, they had their grand opening! This included a selective group of artist work in stained glass as well as three featured artists, a weaver, a handmade paper painter, and a wood carver.

The Trail-Gazette wrote, “Patrons were challenged and refreshed by the diversity of artistic expression exhibited in the varied media and by the artists present who spoke of their calling to the fine or applied arts and their interest in Art Center.” The paper went on to describe the Art Center as “both a showplace and a workplace “because of the strong education vision.

Since 1987, hundreds of artists have exhibited their art in the Art Center and helped the Art Center grow; teaching classes, being on the Board, hanging shows, running fundraisers, building display-cases, greeting art lovers, and making sales. Newhopes, new passions and dreams were born, year after year!

Our featured artist this month is photographer, John Shelton and in recognition of Art Center’s 35 years, we will be highlighting two of the artists from the 1987 opening, Chris Switzer, and Karen Dick.

Chris was one of the driving forces to get Art Center started and opened. She took the courageous steps of being the person to sign the lease, get insurance, opened bank accounts, and do the paperwork for the 501c3 as well as a volunteer director. Chris has remained an artist member for 35 years. Karen Dick was a founding artist and serviced on the first Board. Karen just recently closed her studio but is still an Art Center member!

To help support the Art Center for the next 35 years. Go to the Art Center website, https://www.artcenterofestes.com (click on 35 Anniversary) to donate to the “$35 for 35 years” campaign.

I came to Estes in 1967 with my husband, Phil and our two sons, Dave, and Joe. Joe and his family have continued to live in Estes. Joe’s two sons, Jeff and Ben were born in Estes. Dave lived in Shanghai, China for 11 years. He taught English at the University level. He and his wife, now, live and work near San Francisco, CA. Phil and I raised alpacas in Estes for 40 years.

Since 1971, when I learned to weave, I have been trying different techniques and have had many teachers. Working with bamboo sticks added dimensionality to patterns. Waffle weave became something altogether different. In 1978, I returned to college at Colorado State University and commuted 3 days a week for 6 years, receiving a BFA in 1984 in weaving with a double major in anthropology/archaeology.

At that time, I wondered what would come next. My final project, “Pathways” gave me a sense of hope for the future. Soon, with the help of 20 other local artists, the Art Center of Estes Park came to be. In May 1987, it opened!

I was born in Louisville, KY, grew up in Indiana, and graduated with a degree in Speech and Hearing Therapy from Purdue University. Immediately I came to the beautiful state of Colorado to attend grad school at CSU. Moving to Colorado was the best decision I ever made. After completion of my master’s degree, I was employed as a speech therapist in the Denver Public Schools. It was during this time that I decided to take a nighttime pottery class. Little did I know how long it would take to learn to center the clay and throw respectable forms. But I got hooked. I loved working with the clay and began taking classes in the summers at Castle Clay Pottery Studio and then studied ceramics for several semesters with the late Jim and Nan McKinnell at Loretto Heights College in Denver. To improve my skills, I took workshops at Anderson Ranch in Aspen and at Arrowmont School in Gatlinburg, TN. I became a member of the Castle Clay Co-op in Denver and later the Brimstone Potters in Boulder.

My husband Nate and I moved to Estes Park in the fall of 1983. I was now devoting all my time to making pottery, doing outdoor art fairs in the summer, and selling my pots on consignment. My home studio had an electric kiln, but I needed a facility for doing gas reduction firings. I joined the Boulder Potters’ Guild in 1986 and was a member there for 35 years. I just resigned this past summer and closed my studio.

I was one of the original exhibiting members of the Art Center which was a wonderful association. Through my work in clay, I have made some lifetime friends and I have gained a deep appreciation of the crafts of pottery and weaving. Working with clay, I could see what I had accomplished at the end of the day. I enjoyed experimenting with glazes and forms in functional work. It has always made me happy that people bought my work to use in their own homes or to give as gifts.