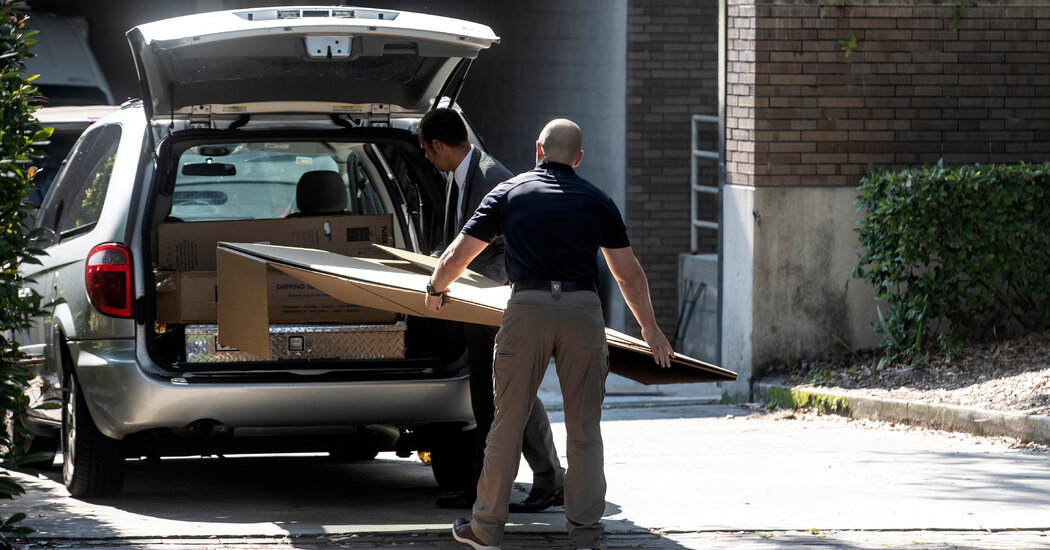 The Federal Bureau of Investigation raided the Orlando Museum of Art on Friday, removing the 25 works that had been part of an exhibit on the life and work of Jean-Michel Basquiat, the museum said.

An affidavit filed to obtain the search warrant questioned the collection’s origin story, as described by its owners and the museum, and noted that there was reason to doubt authenticity of works of art.

The New York Times previously reported that the FBI Art Crime Squad had investigated the authenticity of 25 paintings that the museum said were created by Basquiat and had been on display there for months.

A spokeswoman for the museum said on Friday it had granted an FBI request for access to its “Heroes and Monsters” exhibit, and the exhibit was now in the possession of the FBI.

“It is important to note that we still have not been led to believe that the museum has been or is the subject of an investigation,” spokeswoman Emilia Bourmas-Fry said in a statement sent by email. “We continue to view our involvement only as a fact witness.”

The Basquiat exhibition was to end on June 30 and the works were to be exhibited afterwards in Italy. Museum officials said they would continue to cooperate with authorities.

According to museum employees, more than a dozen FBI agents arrived at the museum Friday morning. They walked through its front doors, presented a warrant, and then quickly began removing the 25 paintings from the walls of the museum. The museum was quickly closed to the public, as curious visitors peered through the now locked entrance and gathered outside and FBI agents packed up the paintings and moved them into waiting vehicles at the loading dock of the museum.

An FBI spokeswoman confirmed that a federal search warrant was executed at the museum on Friday and said the Art Crime Team investigation is ongoing.

The unsealed search warrant, which The Times reviewed, was signed by a judge on Thursday. The 41-page affidavit was issued on the basis that two possible crimes could have occurred: conspiracy and wire fraud. In the documents, the FBI said it was investigating the display and attempted sale of 25 paintings, and said its investigation revealed, among other things, “false information related to the alleged prior ownership of the paintings.” .

Authorities also said their investigation revealed “attempts to sell the paintings using false provenance, and bank statements show possible solicitation of investment in artwork that is not authentic.”

According to the museum and their owners, the paintings in the “Heroes and Monsters: Jean-Michel Basquiat” exhibition were recovered from a Los Angeles warehouse in 2012. The works were largely unpublished before the exhibition opened. in February.

A Times report published that month raised questions about their authenticity. He noted that one of the artworks was painted on the back of a cardboard shipping box with an instruction “Align top of FedEx shipping label here,” in a typeface that , according to a designer who worked for Federal Express, was not used until 1994 – six years after Basquiat’s death.

The search warrant affidavit, which was signed by Elizabeth Rivas, an FBI special agent, notes: “Forensic information indicates that the cardboard on which a painting was made contains a typeface created in 1994, after Basquiat’s death, thus calling into question the authenticity of at least one piece.

The owners of the paintings and the director and general manager of the Orlando museum, Aaron De Groft, have all maintained that the works are authentic. None immediately returned a request for comment on the seizure of the paintings.

De Groft and the owners both said the works, made on scraps of salvaged cardboard, were made by Basquiat in late 1982 while living and working in a studio beneath the art dealer‘s Los Angeles home. Larry Gagosian art and was preparing for an exhibition at the Gagosian Gallery. They said Basquiat sold the works for $5,000 to a now-deceased TV screenwriter, Thad Mumford, who put them in a storage unit and apparently forgot about them for 30 years – until the contents of the unit would be seized for non-payment of rent and auctioned off in 2012. (Gagosian said he “finds the storyline highly unlikely.”)

In the search warrant affidavit, Rivas said she interviewed Mumford in 2014 and learned that “Mumford had never purchased any artwork by Basquiat and was not aware of any work by ‘art by Basquiat in its storage locker’.

Mumford also told Rivas that one of the owners of the artworks had “pressured him to sign documents” claiming he owned the collection, which would help establish the authenticity of the works. paintings, even offering in an email to give him “10% interest.” in net proceeds.

The affidavit states that in 2017, a year before his death, Mumford signed a statement in the presence of federal agents stating that “At no time in the 1980s or at any other time did I meet Jean- Michel Basquiat, and at no time did I acquire or buy paintings by him?

The paintings were purchased for around $15,000 by William Force, an art and antiques dealer, and Leo Mangan, a retired salesman. Pierce O’Donnell, a lawyer, then bought a stake in six of the 25 works and hired several experts who said the works appeared authentic.

One of those hired experts, identified in the affidavit only as “Expert-2,” told the FBI that his work had been misinterpreted by the owners of the paintings. Associate Professor of Art at the University of Maryland, Jordana Moore Saggese, confirmed in an email that she was “Expert-2”. After being paid $60,000 for her work, the affidavit notes, Saggese later contacted the museum to request that his name not be associated with the exhibit at all. The affidavit said the museum’s director, De Groft, emailed him back: “You want us to say you have $60,000 to write this?” So okay. Shut up. You took the money. Stop being holier than you. De Groft, still insisting the paintings were genuine, then threatened to share the details of this payment with his employer: “Do your academic thing and stay in your limited lane.”

The Basquiat estate authentication committee dissolved in 2012, when many artist estates stopped trying to authenticate works due to costly litigation.

If authentic, Basquiat’s paintings would be worth around $100 million, according to Putnam Fine Art and Antique Appraisals, which appraised them for owners. The owners have said in previous interviews that they are trying to sell the works.

The intentional sale of art known to be fake is a federal crime.

Rising temperatures in the southwest increase the risk of burglary