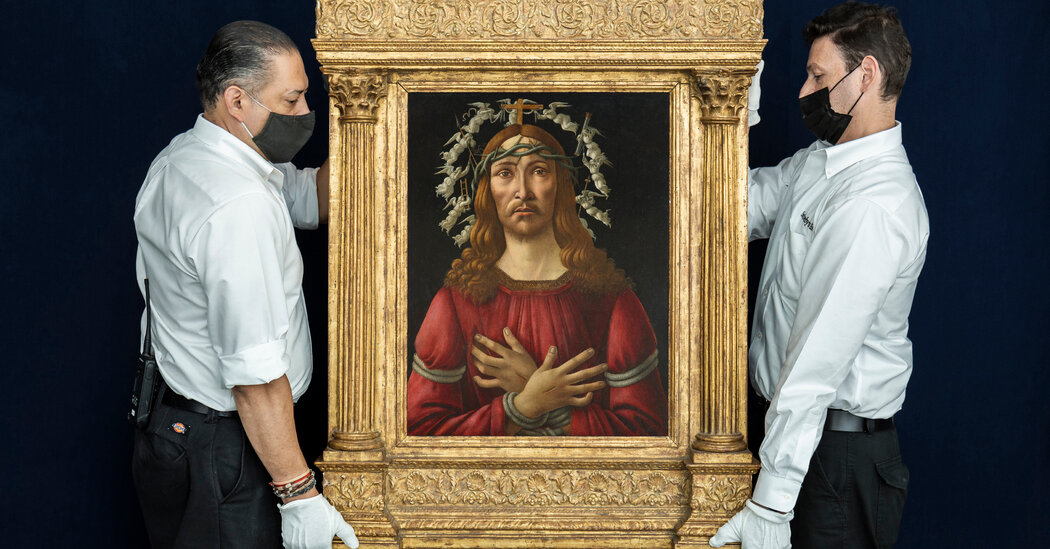 Botticelli sold for $45.4 million at auction at Sotheby’s

A long-neglected painting, considered for decades to be the work of Sandro Botticelli’s studio assistants, sold today at Sotheby’s for $45.4 million with fees, kicking off the cycle of this year of sensational prices for trophy works of art at auction.

Now touted as a “founding masterpiece” by the Italian Renaissance master, Botticelli’s tempera on panel “The Man of Sorrows,” a solemn half-length depiction of the risen Christ raising his hand in blessing, was the most notable work in a sale of 55 lots of Old Master paintings and sculptures on Thursday. Certain to sell for at least $40 million, thanks to a minimum, pre-established “irrevocable bid” from a third-party guarantor, the painting attracted two other bidders. The winning bid, which was not that of the guarantor, was taken by a specialist in old masters from Sotheby’s, Elisabeth Lobkowicz, At New York. The contest lasted six minutes, with bidders offering tentative increases of $100,000.

“It was the right price for the subject – a ‘Christ of Sorrows,'” said Marco Voena, partner at international art dealership Robilant + Voena. “It was a difficult time for Botticelli,” he added, referring to the fervent religiosity of the artist’s later works, which some consider less beautiful.

“The Man of Sorrows” was last auctioned, cataloged as a Botticelli, in 1963, when it sold for a whopping $26,000. Ronald Lightbown, the leading Botticelli scholar of the time, later listed the painting among “studio and school pictures” in his 1978 comprehensive catalog of the artist’s works. It was grouped among the “late workshop products of Botticelli’s circle” in Frank Zöllner’s 2005 monograph on the artist.

But in 2009, this long-ignored painting, from an unnamed family collection, was included as a work with autograph status in the “Botticelli: Resemblance, Myth, Devotion” exhibition at the Städel Museum in Frankfurt.

Bastien Eclercy, curator of the Städel of Italian, French and Spanish paintings before 1800, wrote in the exhibition catalog that the “rediscovered painting from a private collection” represented not only “an important new example of Botticelli’s late period “, but also added a “striking facet to our understanding of the depiction of Christ in the Renaissance.

The attribution was approved by Laurence Kanter, chief curator of European art at the Yale University Art Gallery, and Keith Christiansen, former chair of the European paintings department at the Metropolitan Museum of Art in New York, according to Sotheby’s.

Sotheby’s describes ‘The Man of Sorrows’ as a late work by Botticelli from around 1500, a period when, according to Giorgio Vasari’s 1550 ‘Lives of the Artists’, the Florentine painter fell under the influence of preaching of fire and brimstone of the Dominican friar Girolamo Savonarola, becoming an adherent of the sect of the preacher. The works of Botticelli’s later period have been considered by modern scholars to be imbued with intense religious fervor. The Sotheby’s composition is notable for its halo of mourning angels surrounding the thorn-crowned head of the risen Christ.

The reattributed painting, touted by Sotheby’s as Botticelli’s “defining late-career masterpiece”, went on a global marketing tour with viewings in Los Angeles, London, Dubai and New York. It hung alone in a sepulchral semi-darkness next to photographs that invited comparisons with Albrecht Dürer’s famous “Self-Portrait” at Munich’s Alte Pinakothek and Leonardo da Vinci’s “Salvator Mundi” or “Savior of the World” which sold for $450.3 million at Christie’s, a record for all works of art offered at auction.

It turned out to be Botticelli’s second big ticket sold by Sotheby’s within 12 months. Last January, “Portrait of a Young Man Holding a Roundel,” from the estate of New York real estate magnate and art collector Sheldon Solow, sold for a record $92.2 million. for a Botticelli at auction and an old master photo at Sotheby’s.

Hugo Nathan, a partner at London-based art advisers Beaumont Nathan, said he does not recommend ‘The Man of Sorrows’ to his clients.

“It was a huge prize,” he said. “And personally, I didn’t like the photo. The hands are so clumsy. It was not an image to stimulate the imagination.

Calendar: Come to MOAS to see an exhibition by the Florida Artists Group