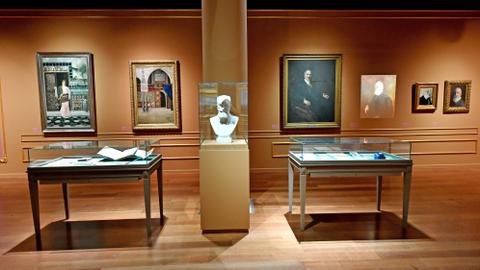 Did you know that the last Ottoman Caliph was an accomplished painter?

Abdulmecid II was the Caliph during the emergence of the Turkish Republic, before leaving for Europe in 1924. He is represented by dozens of paintings and hundreds of mayflies in a massive undertaking of the Sakip Sabanci Museum.

â€œFirst, we started to read,â€ explains Nazan Olcer, curator of the Sakip Sabanci museum. The museum had decided to exhibit the paintings of Abdulmecid II (born 1868 – died 1944), the last ruler of the Ottoman dynasty, two and a half years ago.

The decision was made as the paintings of Abdulmecid II from the SSM collection were being examined in the laboratory to give a better idea of â€‹â€‹its colors, technique and materials. Olcer says she was intrigued by the artist’s painting process.

â€œFor us, each exhibition begins with a long period of reading, trying to get to know the artist and his background,â€ she adds. â€œWe try to get to know the person. We look at the period in which they operated. We put it under the lens, so to speak.

â€œCaliph Abdulmecid Efendi is an important figure in Turkish painting. Just as we have already done exhibitions on the pioneers of Turkish painting, we could not leave it out, â€said Olcer. TRT World. “He has his place next to [forefathers of Turkish painting] Seker Ahmed Pasha (1841-1907), Osman Hamdi Bey (1842-1910) and Suleyman Seyyid (1842-1913). That is why we must also focus on him.

At only eight years old when his father died, the young Abdulmecid then lived in the Feriye Palace with his older sister Nazime Sultan. He attended the sehzade school with his brothers, Sevket and Seyfeddin Efendi, and studied sports, military training, French, German, history, literature, algebra, chemistry, ‘Arabic and Farsi.

The Academy of Fine Arts (known today as the Mimar Sinan University of Fine Arts) was founded in 1882 and teaching began in March 1883.

Abdulmecid II has close ties with the professors of the Academy of Fine Arts; he took art lessons with Osman Hamdi Bey and Salvator Valeri.

Between 1886 and 1888, Abdulmecid II sent several paintings to exhibit in the studio of Georgios Vroutos, professor of sculpture at the Faculty of Fine Arts in Athens, including the painting â€œPortrait of Sultan Abdulazizâ€.

Abdulmecid II also befriends the painter and instructor Fausto Zonaro, the court painter of Abdulhamid II, and takes painting lessons from him.

Abdulmecid II also follows the courses of the teacher of Mekteb-i Sultani (today LycÃ©e Galatasaray) Bertrand Bareilles, which leads him to constitute an art library and to ensure the follow-up of European publications.

â€œWe were lucky with Abdulmecid Efendi,â€ Olcer says modestly, â€œbecause we know his family. personally I knew [his granddaughter] Neslisah Sultan, may she rest in peace. She was a good friend of mine. Thanks to her, I was able to meet the rest of the family and they supported me a lot during the preparation phase of this exhibition.

After the abolition of the caliphate by the legislators of the modern Republic of Turkiye in 1924, Abdulmecid II, the last head of the Ottoman imperial house, made France his homeland. Olcer tells TRT World that the museum was very lucky to receive pieces from the country. She also says she learned a lot from Abdulmecid II’s correspondence, archive work.

â€œThere are works that are being exhibited for the first time,â€ she enthuses. â€œWe thought we knew a lot of his works – it turned out we were wrong,â€ she says. â€œVisitors to this exhibition will see more of his works than those on display at Dolmabahce Palace,â€ she adds. â€œThat’s why I can say I’m happy with the result.

Olcer says the museum is also planning a separate exhibition with the calligraphic works of Abdulmecid II in the future.

â€œI’m sure,â€ she thinks, â€œthat historians working on her biography will find many more documents. I’m sure there will be more artwork the public has ever seen in private hands, which we didn’t reach out to because we didn’t know [that there were such works in existence]. “

â€œI’m sure this will shape future efforts. “

The exhibition at the Sakip Sabanci Museum, ‘Abdulmecid Efendi: The Extraordinary World of the Prince’, brings together 60 paintings and more than 300 documents â€“â€“ 14 come from government agencies, 17 from family collections, private collections of museums and galleries more a self-portrait from the collection of the MassÃ©na Museum in Nice where he spent the last 20 years of his life; and two framed paintings that he gave to Pierre Loti from the Pierre Loti House museum in Rochefort.

What Olcer calls “an exhibition within an exhibition”, there is also a highlight on six works by Abdulmecid II from the SSM collection analyzing his painting technique, the restorations undergone by his paintings, structure, color, the layers and texture of the materials he used and the conditions of his artistic production, collected under the title â€œAbdulmecid Efendi: Beyond the Visibleâ€, a collaboration between Sabanci University, Koc University and the Faculty of Forestry from Istanbul University.

As an added bonus, if you listen carefully enough, you will hear the background music, composed by Abdulmecid II’s father, Sultan Abdulaziz. Abdulmecid II, the Sultan’s first son born during his reign, witnessed his father’s death at a very young age and never forgot him, Olcer said at the press conference.

“He spent about 50 years of his life as a ‘sehzade’, four years as a crown prince [veliahd], about 16 months as caliph, the first and only one elected by the Grand National Assembly of Turkiye, and the last 20 years in exile â€, continues Olcer.

â€œDuring his 76-year life he went through three regimes, two world wars and witnessed the fall of the Ottoman Empire. Yet he was always a kind father and grandfather; he was a painter, but he was also interested in music and the art of calligraphy, â€says Olcer.

“And if he was attached to religion and tradition, he was also an open-minded Turkish intellectual who conversed with the West,” she concludes.

The exhibit is housed in the seaside mansion-turned-museum named after the late businessman and philanthropist Sakip Sabanci – SSM, the Sakip Sabanci Museum. It will be on display until May 1, 2022 on the Galerie -2 floor. Visitors are welcome every day from 10 a.m. to 6 p.m. except Monday and from 10 a.m. to 8 p.m. on Saturday.

Opening a new path for NFTs