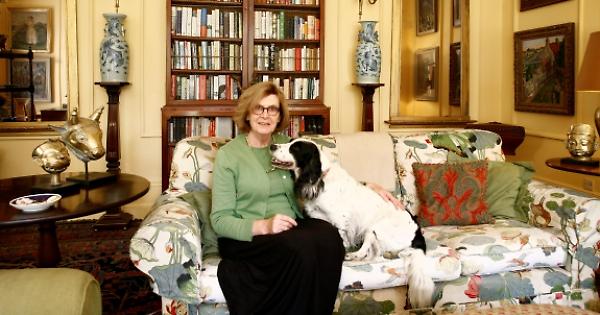 
A FORMER gallery owner says she feels ‘bittersweet’ after selling the contents of her Henley home for almost £ 750,000.

The couple had a common interest in mid-20th century British art and filled the Victorian property with a wide selection of paintings and ornaments.

She decided to sell everything after moving to an apartment in London, where she ran an art gallery in Knightsbridge.

Ms Hunter said: “Some things cost a lot more than we thought and some didn’t cost a lot, but it wasn’t surprising.

“The auctioneers have produced such a stunning catalog and organized it very cleverly. It looked a lot like the interior of our house.

“Modern British paintings that were painted between 1920 and 1960 cost a lot more than we expected and the lampshades did even better than that.

“Some came from artists to whom I became attached. They weren’t particularly valuable, but I didn’t want them to go for nothing in solidarity with the artist.

An image of a purple heron was bought by a private buyer in London for £ 22,100, while a group of four watercolors of exotic birds labeled Neelum Purree, Sharh Bullbull, Phinga and Dhonbie went to a buyer in India for £ 12,000. A pair of Indian tree pieces sold for £ 33,800, while a pair of koels from the same album sold for £ 20,800.

The couple shared a love for India and its decorative arts. They have visited the subcontinent on several occasions and have built up a large collection of items, mainly in shops and auction houses in London.

Shades signed and painted by artist and art historian Quentin Bell have proven to be popular, with a set of 12 small shades from 1991 selling for £ 24,700.

A UK private buyer spent £ 13,650 on Portrait of a lady by Dame Ethel Walker.

Jane Oakley, of Swords, said: “The examples Sally and Ian collected were of high quality – some of them extremely detailed.

“It was a joy to work on this sale. Sally and Ian’s collection was amassed over two decades and included all kinds of well-designed and carefully chosen pieces.

“As with all of our auctions at the moment, demand is very high as there simply aren’t enough opportunities to buy elsewhere.

Ms Hunter lived in Badgemore Grange, next to the Friar Park estate owned by Olivia Harrison, Beatle George’s widow, with Mr Posgate, an insurer at Lloyds of London, who died in 2017.

Most of the paintings were done by artists she supported in her gallery, which specializes in modern British art.

Ms. Hunter said, “Collecting items is fun. He makes a home a home and traces the lives and loves of the occupants.

“It was a collection that we have greatly enjoyed building and living with for many years.”