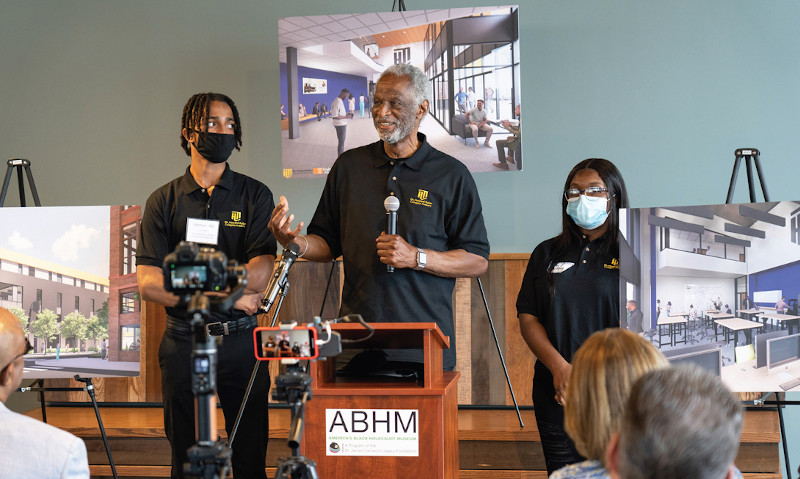 Dr. Howard Fuller speaks at an event July 20 at the Black American Holocaust Museum where the Greater Milwaukee Foundation announced a $3 million investment in the Dr. Howard Fuller Collegiate Academy, coinciding with the campaign to funding for the public charter high school supporting the construction of its new school building on Vel R. Phillips and Garfield Avenues. The Foundation’s support includes a $2 million impact investment bridge loan, providing immediate access to capital for construction, as well as a capital grant of $600,000 and $400,000 in scholarships for HFCA graduates.

MILWAUKEE – July 2022 – The Dr. Howard Fuller Collegiate Academy (HFCA) is pleased to announce that it has received a $3 million investment from the Greater Milwaukee Foundation, which, in conjunction with many of the world’s leading corporate and entrepreneurial philanthropists of the city, will support a new state-of-the-art facility in the Bronzeville area for the Black-founded and run public charter high school with a 10-year track record of 100% college acceptance for senior graduates.

The tuition-free HFCA earlier this week announced the public launch of its Commit to the Future campaign to build a new $20 million, 80,000 square foot high school at Vel R. Phillips and Garfield Avenues. The site is across from the American Black Holocaust Museum and next to ThriveOn King Catalytic Development – part of the ThriveOn Collaboration co-founded by the Greater Milwaukee Foundation (GMF), the Medical College of Wisconsin and Royal Capital with a vision for a Milwaukee that is fair, healthy and prosperous for all.

The Foundation’s investment is supporting HFCA in several ways, consisting of a $2 million impact investing bridge loan providing immediate access to capital for construction, as well as a capital grant of $600,000 and 400 $000 in scholarships for HFCA graduates.

“Our total investment of $3 million represents a generational commitment we are making with Dr. Howard Fuller Collegiate Academy to support academic outcomes for students of color and help reverse systemic inequalities,” said Ellen Gilligan, President and CEO of the Foundation. . “This historic opportunity to support a thriving African-American-led institution aligns strongly with the Foundation’s North Star of racial equity and inclusion, and our vision of a Milwaukee for All.”

GMF joins Northwestern Mutual, WE Energies, RW Baird, Herb Kohl Philanthropies, Bader Philanthropies, Ralph Evinrude Foundation, and entrepreneur-philanthropists Ted and Mary Kellner, among others, to financially support the expansion of a public charter school known for its emphasis on developing academics who are ready for college, career, and life. Each student has an adult mentor at school and a personalized learning plan.

HFCA’s $25 million Commit to the Future campaign, which has already raised $16 million, includes $5 million for a proposed new feeder college. HFCA hopes to renovate the existing high school building at 4030 N. 29th St. for a middle school that would accommodate about 325 students. The new high school is expected to be completed by fall 2023 and will help HFCA grow its enrollment from 325 students to a more financially viable 500 students.

The fundraising campaign represents the culmination of education reformer Howard Fuller’s longstanding legacy in Milwaukee, and the progress made since 2004, when the former superintendent of Milwaukee Public Schools and a group of black clergymen founded the CEO Leadership Academy (now known as Dr. Howard Fuller Collegiate Academy), based on the belief that all children can be educated in a loving and caring environment that is not “just” a school.

“The donation from the Greater Milwaukee Foundation is an investment in the education of Black children in Milwaukee, and it will go a long way toward helping us close a generational achievement gap,” said Fuller, also Distinguished Professor of Education Emeritus. at Marquette University “I have dedicated my life’s work to ensuring that black students have the choice to go to college and have the education they need to thrive in the I have the greatest appreciation and respect for the individuals and businesses in Milwaukee who support this mission and vision,” Fuller added.

The new HFCA district is being redeveloped to return to its early 20th century glory as a black commercial and cultural hub. The location will also position HFCA near Milwaukee Area Technical College and downtown business partners for STEM learnings.

Expanding STEM education, including preparation for careers in business, technology and healthcare, is a strategic part of the vision, along with the proposed feeder college.

“A new middle school would allow HCFA staff to reach students earlier and address skill gaps in sixth grade instead of ninth grade,” said HFCA principal Judith Parker. “The goal is for students to be better prepared for higher-level coursework and dual college enrollment.”

The Dr. Howard Fuller Collegiate Academy is open to all students in the city and supports those with academic and special needs. The student body is predominantly black, and 96% of its students are considered economically disadvantaged. HFCA’s mission is to educate scholars who can transform their world by sending them to college. Milwaukee has one of the largest achievement gaps between black and white students in the nation, and HFCA is focused on changing that reality.

The new high school with a state-of-the-art library, classrooms, study areas, cafeteria and conference space will also add a gymnasium and auditorium for scholars to participate in athletics, fine arts and other activities that their current building cannot accommodate.

“What Principal Judith Parker and the rest of the HFCA staff have accomplished through their vision, dedication and determination is powerful,” said Cory Nettles, Commit to the Future Fundraising Campaign Co-Chair and Founder and CEO. of Generation Growth Capital. , Inc. “They guide black scholars toward 100% college acceptance, prepare scholars to succeed in college or other career paths, and encourage alumni to become the next generation of teachers and of HFCA leaders. Most importantly, they prepare their students to become socially and economically productive citizens.

In addition to Nettles, other fundraising co-chairs include retired BMO Harris executive Patty Cadorin and retired WE Energies executive Thelma Sias. Members of the campaign cabinet include Mary Ellen Stanek of RW Baird, Tim Sheehy of MMAC, Jonas Prising, CEO of Manpower Group, and Michael Lovell, president of Marquette University, among others.

Visit howardfullerca.org/commit to make a donation or learn more about the Commit to the future fundraising campaign