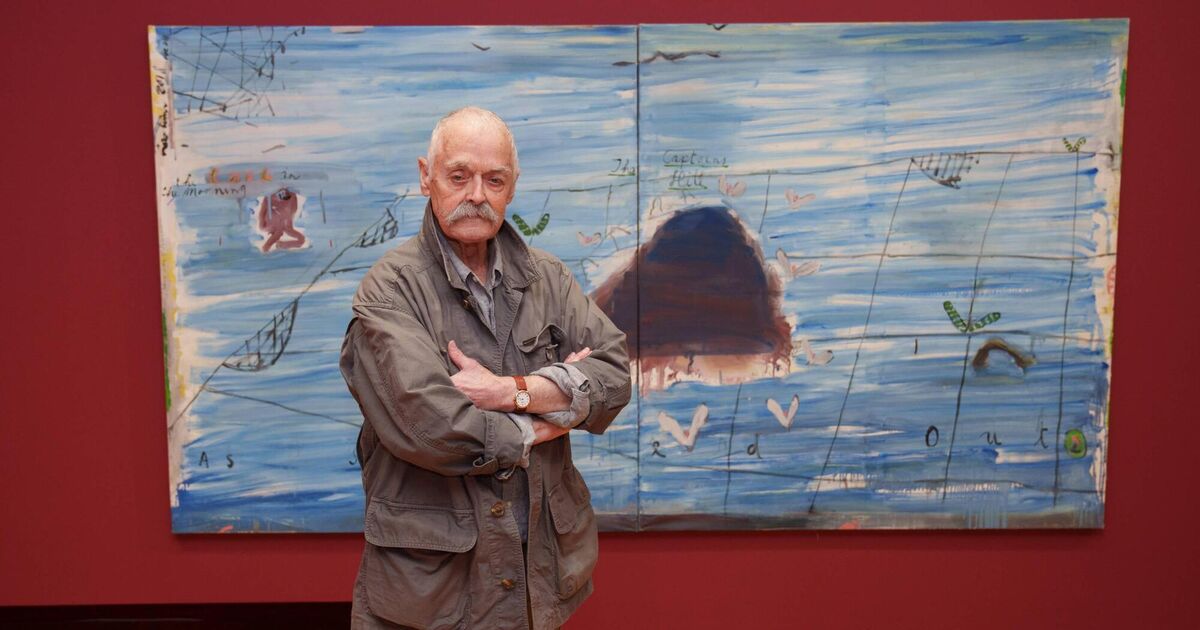 Patrick Graham’s status as one of Ireland’s most celebrated painters was confirmed by his recent retrospective, Transfiguration, at Dublin City Gallery: The Hugh Lane. For a long time, however, he was a divisive figure, whose paintings confused critics and audiences alike. It took years of hard work and perseverance, as well as the backing of a Hollywood legend, before he established himself as a major force in the art world.

As his pieces in the current group show Festival at Dublin’s Hillsboro Fine Art Gallery highlight, much of what Graham paints is autobiographical. Born in Mullingar in 1943, he saw his family break up as a child. Her father decamped to England, in search of work, and rarely returned. Then his mother fell ill with tuberculosis and he and his siblings were placed in the care of different relatives. In his case, he was sent to live with his grandparents, the Montgomerys, who were well-known market gardeners.

“I stayed there for at least a year, and maybe two,” he says. “I loved the plants. I hid in the trees, or in the poppy fields. I lay in the poppies, gazing up at the glittering sky above my head. I was alone, but that’s where I learned to trust nature.

When he has since painted himself, he is often seen holding a flower, a simple connection to that time and place.

Graham has always loved to draw. In high school, his talent was quickly recognized by the art teacher, Diarmuid Larkin. Graham finished first in the country in art in his Group Cert, but was still too young to progress to third level, so Larkin kept him on as an assistant for a year – teaching him how to stretch and size a canvas, how to mix paint, and how to compose an image – before helping her win a scholarship to the National College of Art and Design.

At NCAD, Graham was a star student. “I had it easy,” he says. For all his natural talent, however, he was never satisfied with the work he did. “There was this kind of thing, I could draw beautifully and so on. But that had nothing to do with art. If I drew a tree, it was a tree, and nothing beyond.

In 1963, he attended an exhibition of paintings by German-Danish artist Emil Nolde at the Goethe Institute. Graham is well aware that Nolde has since been castigated as a Nazi supporter, but at the time, he says, “I just saw the work. I had a horrible reaction, it was so assaultive. I discovered for the first time that something had happened to my stomach. Not my head, not my eyes, but my belly. There was this draw, I had to keep coming back to the show, and each time I did, there was a bit more. And I knew that was the truth, that art was a powerful thing and didn’t need to be put together in a neat package that everyone had to pretend to be nice for.

The effect was not to inspire Graham to produce great art, however. Instead, it pissed him off to the extent that he struggled to create. Around the same time, he discovered alcohol. He lost years to addiction and spent several periods in psychiatric hospitals before achieving sobriety with support from the Rutledge Center. He has always been open about his mental health issues. A personal exhibition, in 1974, was entitled Notes from a psychiatric hospital and other love stories.

“People were whispering about it anyway,” he says. “I had nothing to hide.”

He insists he only gained confidence in painting in the early 1980s. By this time he and his friend Brian Maguire had studios in Temple Bar, and the newly sober Graham was eager to find a wider audience than the small group of collectors in Dublin. “I went to London and found this guy named Geoff Evans, who ran the Pentonville Gallery. I persuaded him to come to Dublin to see our work. And based on that, he sent Brian and me to London to do a show. It was definitely our first time exhibiting outside of Ireland, and there was a fantastic response; Time Out magazine made it its show of the month.

The following year Graham was exhibiting at a local gallery in Dublin. He received a call to tell him that Hollywood actor Vincent Price had called. Price was an avid sailor as well as an avid art collector and visited Dublin on his yacht.

“They said I had to come down to meet him, but I didn’t go. He bought three of my paintings. He asked for the frames to be removed, and he rolled up the paintings and took them with him. Months later, Price wrote a letter to say how much he admired Graham’s work, advising him to book a booth at an upcoming art fair in Los Angeles.

“He arranged for me to talk to the organizers, and the next thing I got an invitation to participate. When we got there, it was crazy. There were these huge trucks coming, lots of artwork, and teams of people setting up their booths, when we only had a van, and we were setting things up ourselves. But we got along. We met people from all over the world, then I was chosen by a local gallery, Jack Rutberg Fine Arts, and I have exhibited there ever since.

Graham works one painting at a time, knowing that each canvas is finished “when I run out of it.” It’s a solitary pursuit, but one that suits his nature. “These days, with television and the Internet, there are images that flood you all the time. What’s left is your own little voice, and you need to make it as powerful as possible.

Those moments in the poppy fields of her grandparents still resonate. “The best thing you can do,” he says, “is go somewhere quiet and dream.”