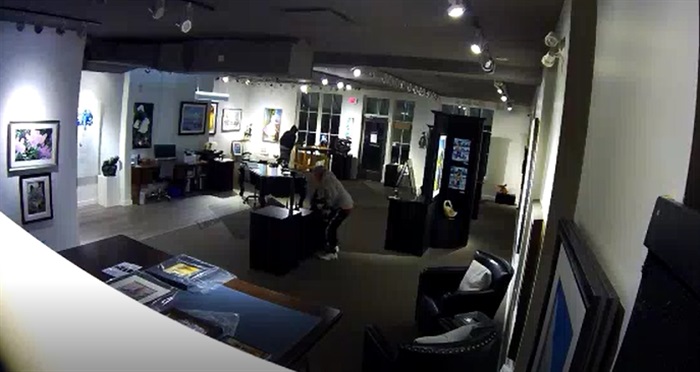 ON VIDEO: Thieves steal approximately $70,000 worth of artwork from Kelowna gallery | infonews

Two suspects were seen taking sculptures inside Gallery 421 on January 15, 2022.

Two cheeky suspects got away with thousands of dollars in artwork from a Kelowna gallery.

At around 1:58 a.m. last night, two men entered Gallery 421 on Raymer Avenue in Kelowna with the help of a crowbar and took away just under $70,000 worth of sculptures , said gallerist Kelly Hanna.

Art theft at the Kelowna Gallery

The heist was completed around 2:02 a.m. The thieves escaped with 11 works of art, weighing about 300 pounds in total, Hanna said.

They took a bronze sculpture, a soap sculpture and some blown glass, Hanna said, adding that no paintings were stolen and the gallery was not damaged other than the door.

Video of the incident shows two men, about 5ft 10in and 5ft 6in tall, of average height, one wearing a dark hoodie and the other grey, in the gallery taking the sculptures and leaving the building .

“We are offering a $1,000 reward for any information shared with police that leads to an arrest,” Hanna said. “It’s very disappointing.”

The gallery has insurance to cover stolen pieces.

Some of the stolen pieces include works by Michael Hermesh, a soapstone sculpture by Vance Theoret and a blown glass work by Jeff Holmwood.

The incident was reported to the RCMP.

In 2020, the gallery was robbed and a computer was stolen, but Hanna said she doesn’t believe the two incidents are related.

The BC RCMP has reported that the investigation is ongoing at this time.

To contact a reporter for this story, email Carli Berry or call 250-864-7494 or email the editor. You can also submit photos, videos or news tips to the newsroom and be entered to win a monthly prize draw.

We appreciate your comments and opinions on our stories, but play well. We will not censor or delete comments unless they contain off-topic statements or links, unnecessary vulgarity, false facts, spam or obviously fake profiles. If you have any concerns about what you see in the comments, email the editor in the link above.