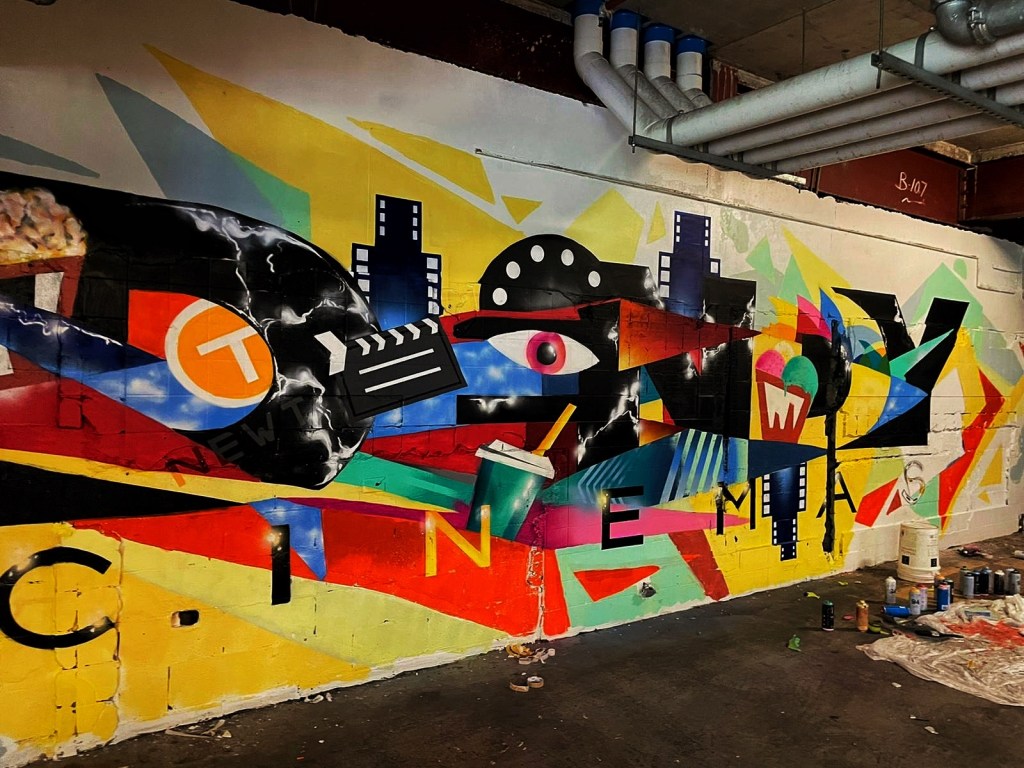 Parking activation: is it art?

Color blocking in car parks is a pervasive form of wayfinding that we subconsciously register – Yellow = Level 3. But what if these incredibly heavy traffic areas were a little more creative in engaging their captive audience?

This is not a new idea; but we’d like to think it was one that’s ripe to grow.

An Australian art company working in this area is Art Pharmacy. They draw on their experience working with developers and consultants and push the idea that car parks can also be “cultural parks”, capturing visitors earlier in their journey and destination narrative.

ArtsHub caught up with one of their project managers, Brunella Muddle, who said that “the artwork created for the parking stations is definitively public art.

She added that “while murals are great, there’s also a lot more you can do to activate these spaces after hours.”

In the City of Sydney, any development project over $10 million is encouraged to devote 1% of its budget to public art. “It’s not enforceable, only recommended,” Muddle said, “but the City of Sydney is very strict in encouraging it and has a great public art panel.”

Other cities have similar programs. Muddle said, “With public art, it has to be in a place where the public can access it. Sometimes parking lots are not [accessible]but you should not rule out optional car parks.

Why? Parking lots have very little visual competition; they have a captive audience and an ingrained history of visual orientation that can be easily expanded.

“Artists started the trend by activating parking lots. A lot has been done in London, like the Brewery Street car park. What’s great about them is that they [can also] become event spaces – they are the perfect blank canvas for art and events, and they lend [themselves] to digital projection and performance.

“While murals are the most popular, I think parking lot activations can go way beyond that,” Muddle told ArtsHub.

A clue to what works best is the success of orientation modes and a long tradition of wall art.

Muddle says that obviously graphically bold designs are the best, but adds: “I think some kind of community or local element that connects the design to the area – whether abstract or more literal in design – can also succeed.”

Whenever possible, Art Pharmacy has chosen to pair local artists with the project. An example is a recent car park project carried out in the Sydney suburb of Newtown. Muddle said the site was very dark and safety was a key priority for the commission.

“A lot of times the goal has been to light up the space, which leads to the idea that people feel safe – safety is important when it comes to car parks – so there’s usually the use of color in the brief. Sometimes the idea of ​​’presenting a community’ is in the brief and creating an unexpected surprise,” she explained.

Muddle said designs that extend beyond an area — like the elevator lobby, wrap around columns, or ascend stairwells — are also a great way to engage captive audiences.

She described an April Group project for their new building, Habitat House in Surry Hills (2020), where artist Claire Nakazawa worked after hours, slowing down the painting of the elevator shaft over a two-week period .

It was one of those amazing spaces; it’s not planned.

“This work of art is a fresco of moving images. It explores how colours, shapes and textures change as one travels through the levels of the elevator. The mirrored ceiling enhances the artwork, creating symmetry by mirroring the design above the traveler’s head. This site-specific mural provides a glimpse into an often invisible space,” Nakazawa said of the project.

Emilya Colliver, founded by Art Pharmacy, added: “Our challenge was to find a muralist who could not only design flexible, site-specific artwork, but also someone who was equally comfortable sitting atop of an elevator in a confined space for countless nights to paint the work directly on the surface of the raw cement.’

Muddle said she felt developers and boards were increasingly interested in the trend, and there was an opportunity for artists here.

Muddle says any public artwork commissioned should come with a maintenance manual as part of the project. Similarly, any mural ordered is finished with an anti-graffiti coating.

She added that one of the benefits of the car parks is that “because they’re indoors, they’re not as exposed to the elements”, adding that due to their rough construction, “sometimes we have to pass a little extra time to ensure the walls are prepared properly.

“Murals in the workplace are certainly on the rise as well, especially post-COVID. Companies want to attract people with this commitment. We also see that they want to do a launch when it’s done, with an artist talk to bring employees together. I noticed [recent commissions] are definitely not just about the art, but how they can engage people, especially once it’s done,” she continued.

“Some even wanted to involve them in the process of developing the work, inviting employees to contribute to the concept [ideas].’

And, like any other commissioned artwork, Muddle says that in any parking activation contract, there is “usually an alienation clause in the client contract, which [requests] they consult with us if they are considering removing the artwork, so that we can advise the artist.

The reactivation of these multistory sites has been a growing trend over the past decade. Some of the best known examples are:

Another is Peckham Levels (in south London), designed in the 1980s but reimagined as a hybrid cultural venue in 2008 by gallerist Hannah Barry, with the company co-founded and designed by Carl Turner Architects. They have transformed the top three floors into a sculpture park and event space that comes alive from June to September each year.

And, demonstrating how far the parking activation concept can go, there are a number of international examples where architects have taken the adaptation of the “blank canvas” and incorporated this thinking “from parking lot to cultural park ” in the planning, well before the ground. was even broken on construction.

Designed by award-winning architects Herzog & de Meuron, 1111 Lincoln Road in Miami (USA) was envisioned from the outset as “a cultural blueprint where people can produce culture” by developer Robert Wennett. It combines parking with retail outlets, a yoga studio, event spaces and rooftop restaurants. It opened in 2010.

“I had the opportunity to change people’s perception of what parking is and build a type of building that becomes a social gathering space and a public space,” Wennett told Dezeen.

And like 1111 Lincoln Road, the Z in downtown Detroit (USA) was designed as a “destination” from the start. In addition to its 1,287 parking spaces, it includes 34,000 square feet of commercial and mixed-use space. Twenty-seven international artists were commissioned to transform the interior walls of The Z, a space dedicated to the arts called “The Belt”.

The Euratlantique car park in Bordeaux (France) is another example, designed by the architect Brisac Gonzales. He says: “In many cases car parks sit idle after hours, creating dead zones of activity. Euratlantique rebalances this day/night balance.

From establishment to ARI (Artist Run Initiatives), another example has been Parking Project in Berlin, led by Australian artist Scott Chaseling, and of course the five-year success of Alaska Projects (2011-2016, when it has been re-imagined in a display case) located in a Kings Cross parking lot in Sydney run by curator Sebastian Goldspink. Various projects in Western Sydney by C3West and Pari in Parramatta have also used car parks for pop-up artwork and performances.

Keep your eyes peeled for more examples, or better yet approach your local council and help spread the trend.