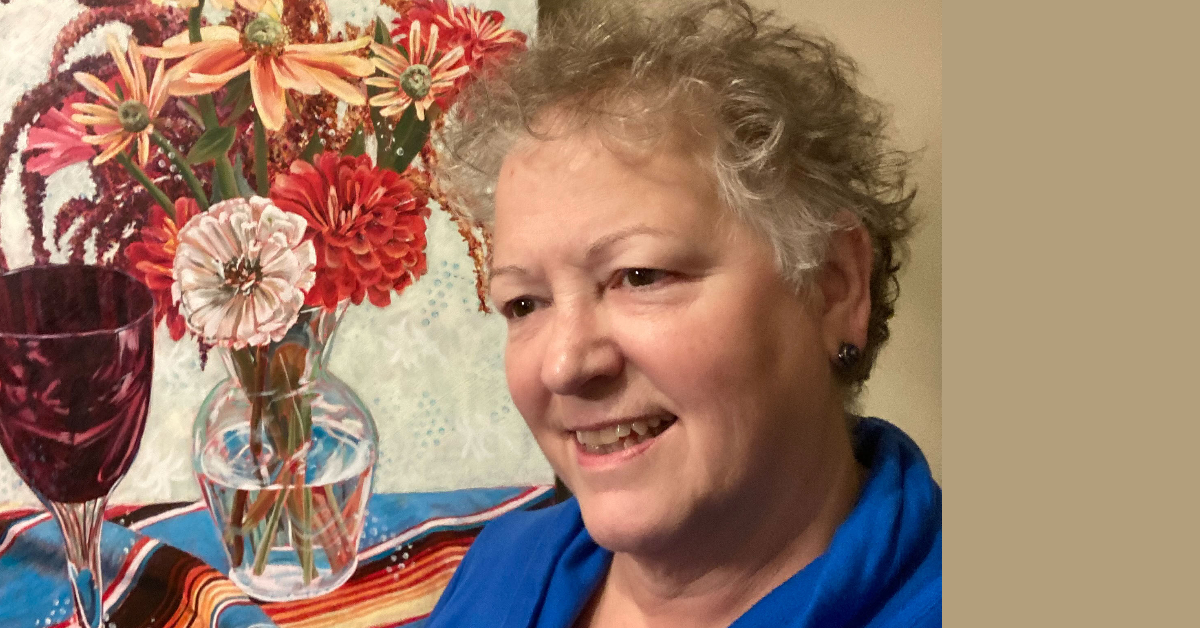 She was an art educator at Warren Central High School for 30 years and during that time amassed numerous honors and awards for her teaching as well as her personal work.

“It’s something I’ve always wanted to do,” Mitchell said.

The Vicksburg native said those familiar with her art might be surprised at what’s on display at the gallery.

“I switched from the watercolors I had been doing for 30 years to acrylics after moving to Oxford,” she said.

Currently, Mitchell lives in Oxford with her husband Charlie, who was a former editor of the Vicksburg Post and is now an associate professor at the University of Mississippi.

Mitchell said the transition from watercolor to acrylic was a six-year process. The first three, she said, were spent deciding on her color palette, what brand of paint she would use, and “how I wanted to paint my art.”

The last three were spent enjoying his new medium.

“So finally, for three years, I like what I do. I found my own voice with how I want to express the world around me,” she said.

Mitchell, although she appreciates abstract art, has described her works as “realism”.

“I can’t do abstract art. I don’t see it that way, but I like some of the depth that they (abstract artists) achieve with all the layers,” she said.

Therefore, Mitchell devised his own method of creating layers.

“I use stamps,” she said, which transfer a pattern onto the acrylic paints. Mitchell said she will sometimes use a ready-made stamp she bought, but more often will carve her own out of wood. These patterns in the paint, she said, help give her works not only depth, but also added interest.

“I’m interested in painting birds and animals because the expressions on animals amaze me because they just remind me of people and students,” Mitchell said.

Randy Jolly, who is the director of the Gore Gallery and taught alongside Mitchell for 20 years, said he was happy Mitchell was on display at the gallery.

“I’m very happy for people to see his work,” Jolly said. “Over the past eight years, she (Mitchell) has grown tremendously.”

Jolly said those who have been to the gallery and seen the show have been captivated.

“People respond beautifully to her work because it’s so beautiful, bright, colorful and well done. She has a really good understanding of color and design,” Jolly said.

There are 47 Mitchell artworks on display at the gallery, which is open to the public from 9 a.m. to 7 p.m. Mondays and Thursdays and 9 a.m. to 3 p.m. Tuesdays, Wednesdays and Fridays through September.

Jolly said the art was for sale and upon receipt Mitchell would also have prints for sale.

Mitchell was among the first high school art educators in Mississippi to earn National Board certification and was named the Mississippi Art Educator High School Teacher of the Year for 2003-2004. While at WCHS, Mitchell was a STAR teacher and served as head of the fine arts department. She has been accepted three times to present at the National Art Educators Conferences in New York, Washington and Chicago.

Mitchell has received honors at national and local art shows for works in mixed media, drawing, acrylic and watercolor. His paintings have also been accepted into several Mississippi Art Colony exhibits that travel to galleries across the state.

After retirement, Mitchell created a “More Than a Painting” art course for non-artists, which has been offered at the Southern Cultural Heritage Center for years.

Terri Frazier was born in Cleveland. Soon after, the family moved to Vicksburg. She is a part-time reporter for the Vicksburg Post and editor of Vicksburg Living Magazine, which was awarded first place by the Mississippi Press Association. She was also the recipient of a first place award in the editorial division of the MPA’s Better Newspaper Contest for “Best Feature Article”.

Terri is a graduate of Warren Central High School and Mississippi State University, where she earned a bachelor’s degree in communications with a major in public relations.

Before coming to work at the Post just over 10 years ago, she freelanced at the Jackson Free Press. But for most of her life, she enjoyed being a full-time stay-at-home mom.

Terri is a member of Crawford Street United Methodist Church. She is a life member of the Vicksburg Junior Auxiliary and was a member of the Sampler Antique Club and the Town and Country Garden Club. She is married to Dr. Walter Frazier.

“Whether it’s staying informed about local government issues or hearing the stories of local residents, a local newspaper is vital to a community. I have felt privileged to be part of a dedicated team at the Post throughout my tenure and hope that with theirs and with local support, I can continue to grow and hone my skills by helping to share the stories in Vicksburg. When people ask me what I love most about my job, my answer is always “the people”.