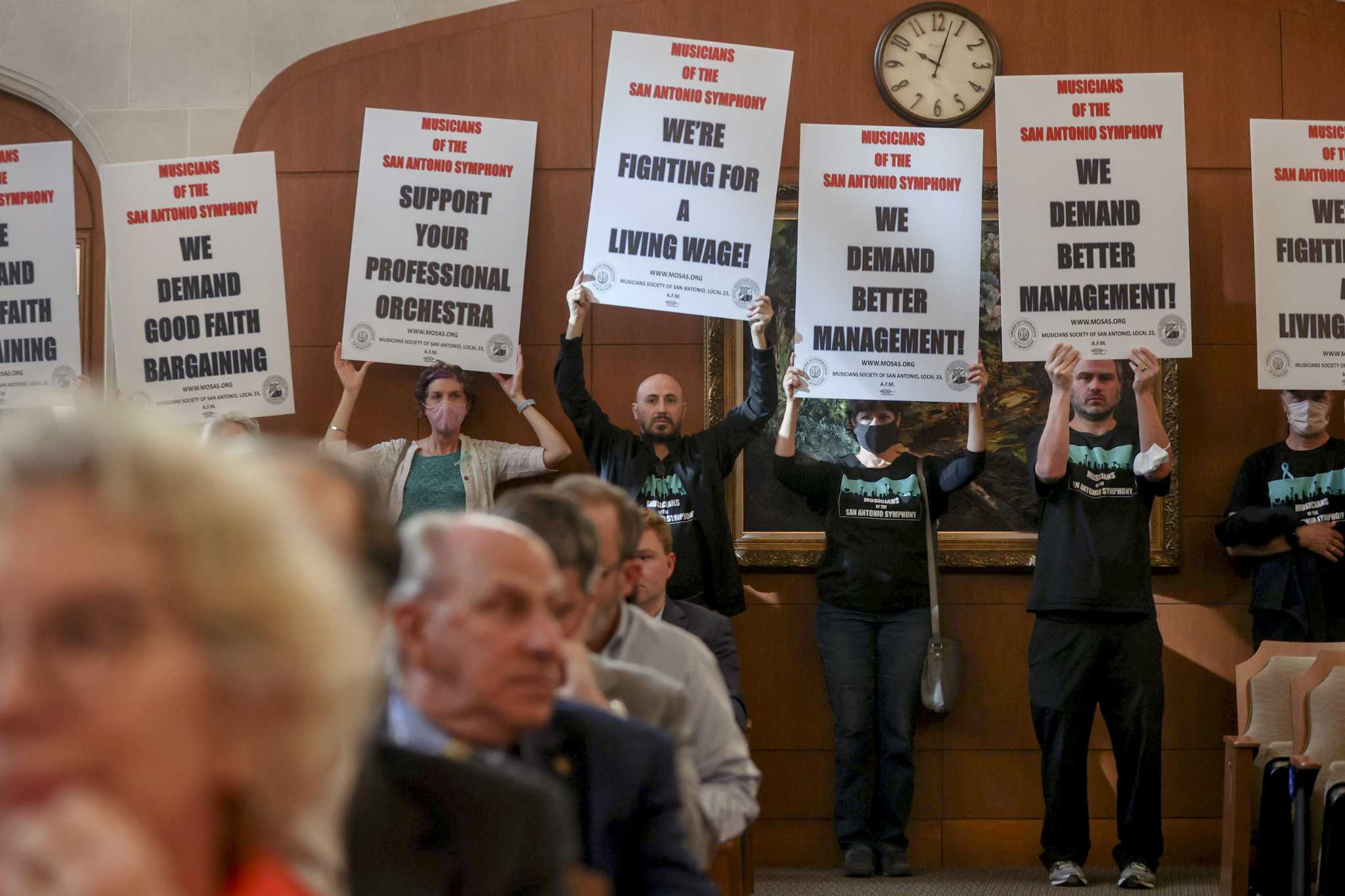 More than six months into the strike by musicians at the San Antonio Symphony, the possibility of the orchestra’s 2021-22 season ending before the strike seems increasingly likely.

The musicians have been on strike since Sept. 27 over a labor dispute with the Symphony Society of San Antonio, the nonprofit board that runs the orchestra. As negotiations continue, the musicians have planned their own three-concert series. And the San Antonio Opera, which normally contracts with the symphony orchestra for its productions, had to come up with a plan B because of the strike.

The symphony has not played since a free concert Sept. 18 in Main Plaza. No ticketed concerts for the 2021-22 season were played at the Tobin Center for the Performing Arts, where the symphony is one of the resident companies. So far, five performances have been postponed and 10 have been cancelled.

Three classical concerts and a Pops program remain in the season, which is scheduled to end on June 4.

The disputed contract runs until August 31. If no agreement is reached by then, the strike will continue pending contract negotiations.

“As is the case when a (collective agreement) is about to expire, a successor agreement must be reached,” said Richard Oppenheim, president of Local 23 of the American Federation of Musicians, the union trading on behalf of musicians. . “It is always preferable that this happens while the current CBA is in effect, but it is still the case even if the current agreement expires.”

It is still possible that at least some of the concerts planned for the season will take place, said Corey Cowart, executive director of the symphony.

“There are orchestras in other cities and other markets that have had a similar schedule of contract resolutions that have returned to concerts in late April or May for an abbreviated season,” Cowart said.

The musicians and council began working with federal mediators on February 14 and have met three times so far. Both parties are working to determine a date for a fourth session.

At the March 8 meeting, the board offered a contract that, if the musicians accepted, would resume performances for the current season and run through 2026. The base salary would be set at $30,650 for 30 weeks of work and would include increases. The average salary would be $35,400. The contract also includes health care and insurance benefits. But that would reduce the number of musicians from 72 to 50 through attrition.

The musicians were originally scheduled to receive a base salary of $35,774 for the 2021-22 season, before the contract was reopened due to the financial impact of the pandemic.

The musicians had already taken an 80% pay cut for the 2020-21 season, which was severely curtailed by the pandemic.

Following contentious negotiations last year, the Symphony Society imposed a contract on the musicians in September that reduced the full-time salary to $24,000 a year and the number of full-time musicians to 40. That’s when that the musicians went on strike.

The union has not made a formal counteroffer to the March 8 board proposal, Oppenheim said. The union is awaiting a response to a request for information sent to the Symphony Society on April 5 before a counter is filed.

Eliminating positions through attrition opens the door to the possibility of entire sections of instruments being lost, said violinist Mary Ellen Goree, chair of the symphony musicians’ bargaining committee.

“I don’t think it will work for artistic reasons and also because there’s nothing to say that they won’t come back to us in a year or two years and say, ‘We said a minimum of 50, and in fact , more than 60 of you stayed and we can’t afford it, so we have to reopen the contract,” she said. “Nothing says they can’t do this or won’t do this.”

Fourteen of the symphony orchestra’s 72 positions are currently open. Five musicians left in 2020, Cowart said, and the orchestra was unable to hold auditions to replace them because of the pandemic. Three retired in August 2021. And six have requested sabbaticals for the 2022-23 season. Their positions will be kept open so they can return in the 2023-24 season.

During the strike, the board canceled the musicians’ health insurance and other benefits, and both sides filed a complaint with the National Labor Relations Board, accusing each other of failing to bargain in good faith.

The complaint process is ongoing.

During this time, the musicians began to play together, but they did not do so as part of the San Antonio Symphony Orchestra. They performed in March for the first time since the strike began as part of First Baptist Church’s first fine arts series, performing as musicians of the San Antonio Symphony Orchestra. And they will launch a new series of three programs on Thursday.

” Let’s be clear. These are not symphonic concerts,” Goree said. “I’ve actually had people say to me, ‘Are you not back at work?’ I work, but I don’t work for the Symphony Society.

The musicians will perform on Thursday, April 22 under the direction of conductor Stefan Sanders, music director of the Central Texas Philharmonic and the Fayetteville Symphony Orchestra in North Carolina. The following concerts, May 12-13 and June 2-3, will be conducted by former symphonic music directors Sebastian Lang-Lessing and Christopher Wilkins.

The musicians will also give free family concerts on April 23 and June 4.

All concerts will take place at First Baptist.

The performances are meant to put money in musicians’ pockets and keep their fight in the public eye, said bassoonist Brian Petkovich, president of the Musicians of San Antonio Symphony Performance Fund, a new nonprofit founded by musicians to present shows and educational programs.

“Playing music for people is why we do it in the first place,” Petkovich said. “It’s really important that people know we’re here and remember what it’s about.”

The concert series is funded in part by a $100,000 grant from the San Antonio Symphony League, a nonprofit organization that provides volunteer and financial support to the symphony and the musicians. The musicians raise an additional $100,000 to cover expenses.

Education, including concerts for school-aged children, is a big part of the Symphony League’s mission. The organization had been in talks with the musicians about producing a youth concert last fall at the Tobin Center, but the arrival of the omicron variant crushed those plans, said league president Vickie Kinder. . They still wanted to find a way to implement this kind of programming, absent since the start of the pandemic in 2020.

“When Brian Petkovich approached us with this, and we had gone to the concert in March, we thought that was a way to do it,” Kinder said.

In addition to concerts at the First Baptist, some of the musicians have been contracted to perform as part of the orchestra for the San Antonio Opera’s production of “Rigoletto” on May 5 and 7. Normally the symphony would be contracted, but the opera had to go in another direction because of the strike.

The production calls for 52 musicians, a number that would have been used if the San Antonio Symphony Orchestra was playing, said E. Loren Meeker, the company’s general and artistic director.

“It’s going to allow us to do the complete opera as Verdi intended,” Meeker said. “For the first time in two years, we have a full orchestra, full sets and costumes, a full cast, a full choir, and we’re really, really excited to be back in grand opera.”

Meeker said she will continue to monitor the situation with the symphony so she can plan accordingly.

“We want a quick resolution,” she said. “For now, I’m so happy that we can create incredible works of art with incredible talent.”

2079: A Year of Renewed Hopes for Artists – The Himalayan Times – Nepal’s No.1 English Daily Newspaper