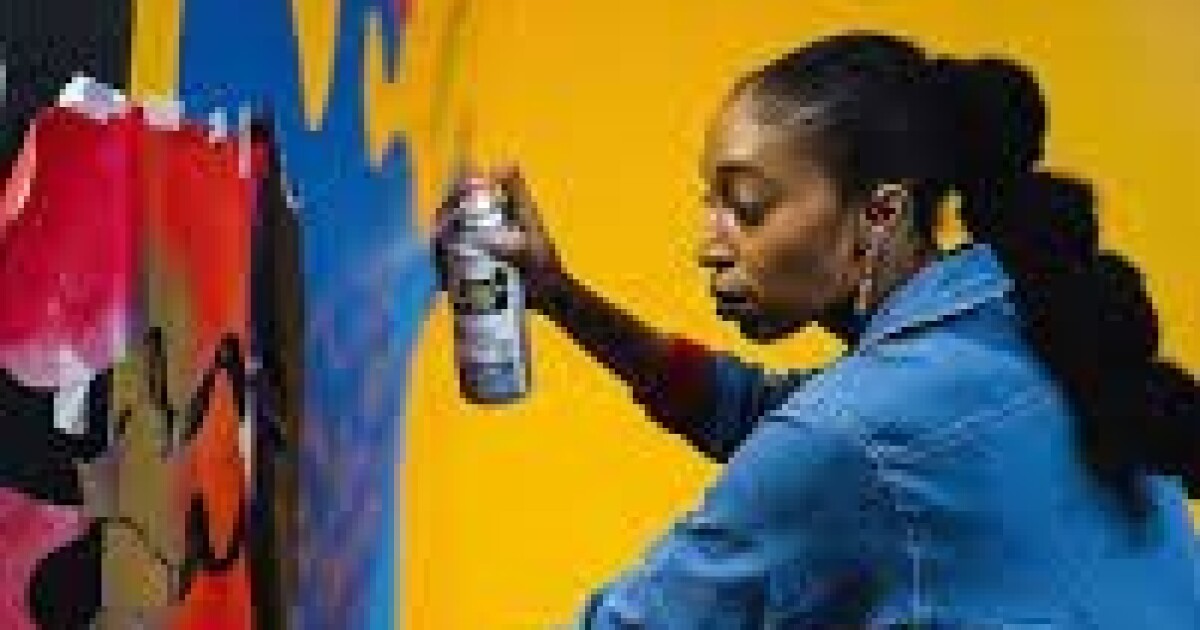 The San Luis Obispo Museum of Art (SLOMA) announces that Erin Leann Mitchell will be the artist in charge of its next outdoor mural.

This is the second in a series of murals that cover all four sides of the museum building in downtown San Luis Obispo.

Scheduled to change on a yearly basis, SLOMA selects emerging artists of diverse backgrounds from across the country.

“After the resounding success of the museum’s first mural project PacificCaribbean by Juan Alberto Negroni, this second mural was highly anticipated,” said SLOMA Executive Director Leann Standish. “Following the first mural which was necessitated in many ways by the pandemic, the level of public engagement for the Museum has increased beyond our expectations. Mitchell’s work will continue this beloved program and hopefully engage our community in even more meaningful ways.

Mitchell works in a variety of mediums, including textile design.

Originally from Birmingham, Alabama, Mitchell attended the School of the Art Institute of Chicago, earning her Bachelor of Fine Arts in 2011 and a Masters in Art Education from Columbia College in 2016.

More recently, Mitchell was included in a group show All things bright and beautiful at the Birmingham Museum of Art alongside Amy Sherald (known for the portraits of Obama at the National Portrait Gallery) and the painter Kerry James Marshall.

Mitchell’s work is widely followed and has also been featured on the television show Empire.

She was recently commissioned to create a portrait to honor the humanitarian achievements of Dr. Angela Y. Davis.

Mitchell’s work at SLOMA, Calafia was there, will reference the fictional black warrior queen and unrecorded histories of black Americans in the West.

The design is a nod to Mitchell’s existing textile practice and uses quilting patterns and ornate patterns. It will be painted by Mitchell with the help of two assistants beginning February 3 and ending February 24.

“While PacificCaribbean will always hold a very special place in our hearts, we are thrilled to carry on this important work of the brilliant Erin Mitchell,” said Saperstein. “Conceptually powerful and visually stunning, this colorful piece will contribute profoundly to the development of the City of SLO’s public art program.”

Admission is free for all. More information on www.sloma.org

Inflation protection for stocks and bonds with TIPS

ON VIDEO: Thieves steal approximately $70,000 worth of artwork from Kelowna gallery | infonews