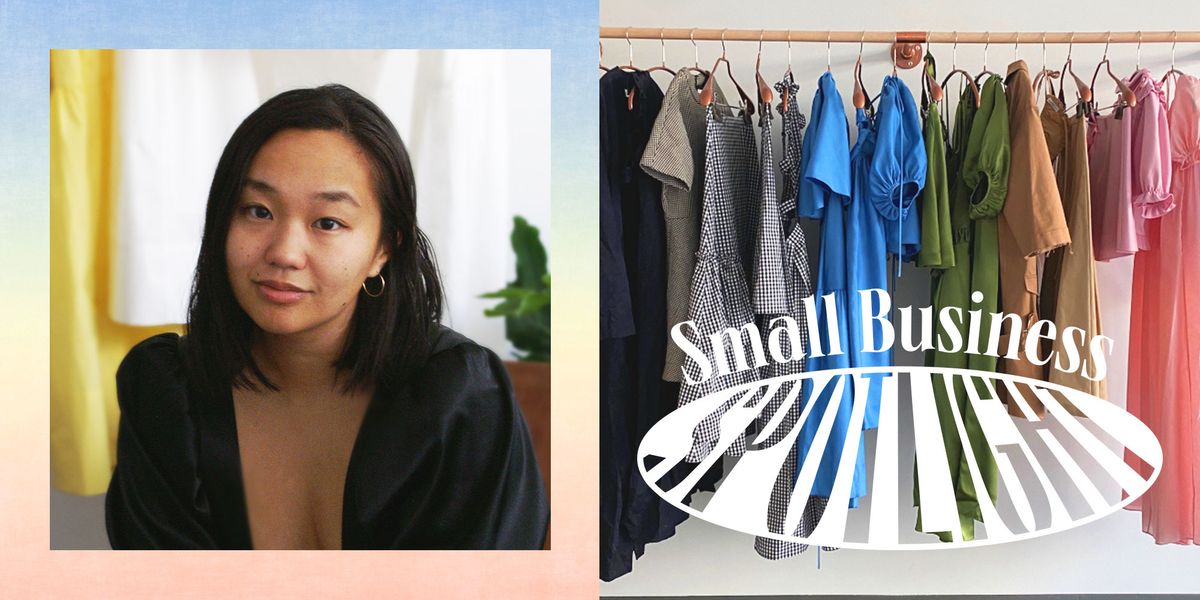 Women running their own business? We like to see it. In our Small Business Spotlight series, we chat with independent fashion entrepreneurs on their journey to being your own boss. Here, tips for fundraising, developing a marketing strategy, navigating social media, and more, straight from women who have done it themselves.

Liu describes her journey as a fashion designer as both restlessness and a leap of faith. “I went to the MICA [The Maryland Institute College of Art], and it wasn’t really a fashion school. I should have gone to Parsons or FIT or something, but, at the time, I was a painting student and then I realized that I sucked at people who are naturally amazing, so I I was like, ‘Okay, this is not going to work.'” While figuring out how to pivot, she studied everything from painting to drawing to user experience before finally finding her enthusiasm for childhood for fashion. “I worked in several houses: I was at Thakoon, The Row, Rebecca Taylor and J. Crew.”

But, deep down, Liu knew she wanted to design her own pieces and execute a singular artistic vision. “In 2015, I decided to go for it. I saved enough money to release a collection, which was exciting, but considering what I was paid, I wasn’t eating.” Liu took a few more seasons after that before taking a brief break from entrepreneurship, but once again fate intervened and she was pushed back into her eponymous fashion line.

“During [my hiatus], I really wasn’t putting in anything for the line, so I lost my momentum. Then I got fired from J. Crew because of the pandemic, so I was like, ‘You know what? I will try again. Why not?’ So, again, I dipped into my savings, which is always a risk, and pulled out a capsule.”

Now, two years later, she has her own boutique in Brooklyn as well as thousands of loyal customers, including nearly 17,000 Instagram followers and a handful of celebrity fans. With her commitment to small-batch, eco-friendly production and ethical work, she’s right on target for the recent (and much-needed) sustainable fashion movement. Moreover, she does something original: drawing inspiration from various sources of art and photography in order to create pieces that stand out from existing brands and trends.

“Being trained in fine art is very helpful,” she admits, citing her main artistic influences like Nobuyoshi Araki, Ren Hang and 17th-century Dutch portraiture. “Every time I draw something, it’s like making another piece of art for me…I take a lot of care in my sketches. I really like them, visually, and I’ve gone into fashion from away because I’m really a tactile person – I love 3D shapes There’s something really satisfying about having in your hands something you started on paper, even if it doesn’t look like the sketch at all .

On the fusion of fine art and fashion

“My inspiration really comes from [photographers] Nobuyoshi Araki, Ren Hang and 17th Century Dutch Portraiture. Araki and Hang’s thing is very sexual; he is very aggressive in his sexuality. Coming from a very repressed family background, sensuality has always interested me. I speak a little Mandarin, but I don’t even know how to say sex in Mandarin, because my parents never taught me. It was just one of those things we didn’t talk about.

“When I started in fashion, my pieces were much more blatantly inspired by it. There were a lot of garter belt influences, and I played a lot with freedom and restraint – like, I made a piece with invisible zippers so you could really alter the shape of what you were wearing. But those pieces didn’t really sell, and they were also very expensive to produce, so my pieces are much more subtle now. By like, there’s a lot of braces on my stuff. It all sounds really nice, I’ve heard from other people, but there’s an underlying subversive, dark, sexualized place that it’s formed from. I’m toning it down a bit, because the reality is that I really want to make sales and create pieces that people can wear everyday and still feel beautiful.”

“It’s always been really surreal to me. I get direct messages almost daily from people saying, ‘I’m saving up for your article!’ Someone just DMed me saying, “I just bought my first Allina Liu piece and can’t wait to get it. It’s so humbling in every aspect, like I can’t Believe the amount of support I’ve received. It’s the greatest honor when you realize what you’ve done is paying off.

“I think longevity trumps luck. If you’re persistent and can stick with it, you’ll find luck. It’s so sad, because a lot of the brands that started in 2015 by my side aren’t no longer there and no longer designing, and they’re really, really talented people. It takes so long to build brand awareness, but I think if you stick around long enough, people are going to notice you.

On the politics of BIPOC in fashion

“I got so much press when all the anti-AAPI hate was going on, and the recognition was really exciting, but it was also kind of disappointing because it was like, ‘Oh, you’re finally writing about this at because of what happened,” but all the while there has been a lot of neglect of the Asian American community.

“Being an Asian woman unfortunately means being fetishized on a very regular basis. There are guys who like very submissive Asian women, so having a business has really empowered me. It says I’m not going to fit into that model what other people think Asian women are, where they’re just quiet and reserved and they’ll wait for you at home.”

“Time is your most precious currency, because you’re going to run out of it. If you’re young right now and have the energy to take on two or three jobs and get there, then do it. Success It It’s not necessarily about how good you are, it’s about how badly you want it. And if you think people aren’t going to like it or it won’t be well received, then agree:” Okay, maybe not.” ― but you’ll never know unless you give it a chance.

“Time is precious and that’s the only advice I can give to someone who’s waiting is that the longer you wait, the more upset you’re going to get, and you might wake up one day and be like, ‘Oh , I forgot to do this, I didn’t have time to do this. You really don’t want to be on your deathbed thinking, “I had this brilliant idea and I honestly thought I was pretty talented, so why didn’t I try?

“My father’s life motto is, ‘What have you got to lose?’ And that sums it up.”

On financing your business

“You have to save, even though I know it’s such a hard thing to do, especially in New York. Financing small businesses through loans is really difficult because of the interest you have to pay over time It’s aggressive to take out a loan, so if you have a nest egg that you’ve saved up and if you’re able to set money aside every month, even if it’s just $100 a check from pays, you should just make it an investment in yourself and your life, or you’re going to be stuck doing shitty jobs.

“Showcasing an Excel spreadsheet and aggressively tracking my finances has made all the difference for me because before I was just like, ‘I’ll buy that $20 pizza, whatever, it’s $20 ! But that’s $20 that could be invested in packing supplies, shipping supplies, etc.”

“I think it’s important to understand the demographics of your audience and what they want you to know. There has to be a trade-off because my things have worked better than ever before, and I think that’s because that they look a lot more wearable. In the future, I’d like to be a little more edgy, because I don’t want to be pigeonholed into this ultra-feminine world. I want people to be like, ‘D’ Okay, she can do some cooler stuff, but she’s also got these adorable bits.'”