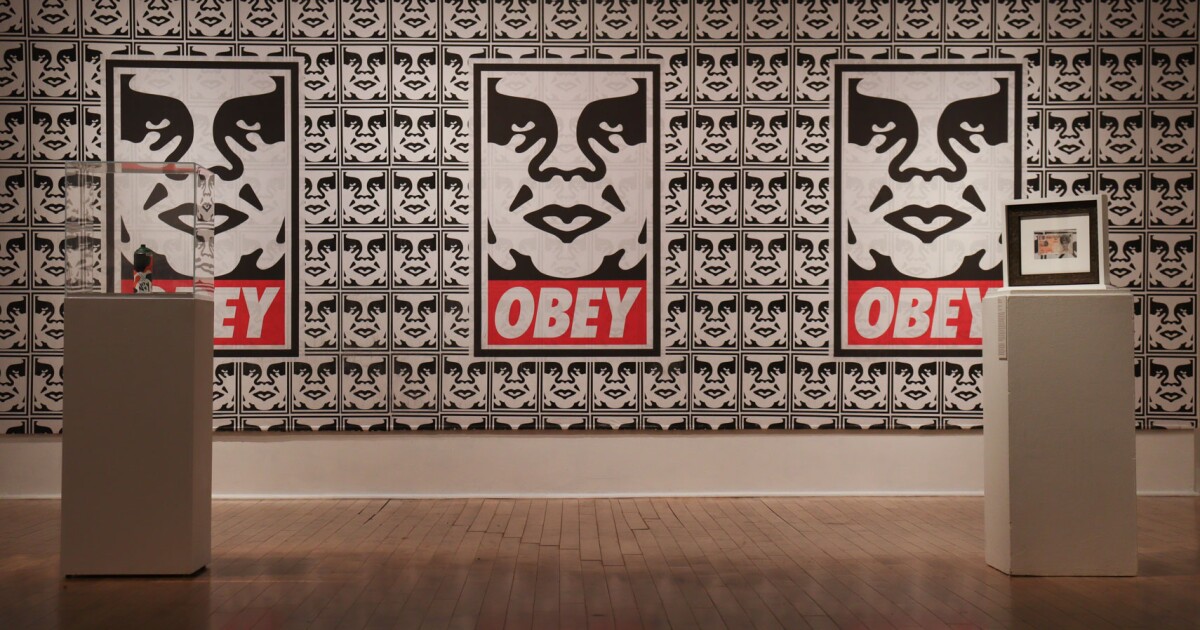 The Pensacola Museum of Art is currently showing the new “Vandals to Vanguards” exhibit. Populating the entire second floor of the museum, the exhibit features contemporary pieces from pop favorites like Andy Warhol, Keith Haring, Roy Lichtenstein and Claes Oldenburg. Street artists such as Banksy, Mr. Brainwash, Shepard Fairey and Jeremy Novy will also have works on display.

“Vandals to Vanguards” explores how several icons of modern art have achieved success by rebelling against the mainstream art world and seeking a more democratic form of artistic expression. Beginning in the 1960s with pop art’s use of mundane imagery from entertainment and advertising, the exhibition shows how generations of artists have recycled and remixed concepts and themes to advance and challenge the limits of art.

“Keith Haring’s 1986 ‘Andy Mouse’ serigraph really captures the spirit of the exhibit,” said Anna Wall, chief curator at the Pensacola Museum of Art. “The print features a fusion of Andy Warhol and Mickey Mouse, with Warhol’s silver wig flared between the famous mouse ears. The piece captures Warhol as an American pop icon, standing in a pool of silver. Beyond depicting the artist as a famous pop superstar, the print illustrates how Warhol, Haring and other artists of the time worked together and learned from each other as they navigated this new artistic world they have created.

The pieces that will be exhibited reflect the concerns of the artists to create a more autonomous and accessible art. Warhol and other 1960s pop artists began using commercial processes like screen printing to create duplicate pieces quickly and easily. Later generations adopted these techniques to create works of art that reached a wider audience through mass distribution.

There are approximately 45 works of art on display in the “Vandals to Vanguards” exhibit. Former Pensacola Museum of Art director Maria Goldberg envisioned the exhibit with her friend and mentor, Lewis Bear, Jr., as a way to showcase some of the contemporary artwork held in local collections.

“In the conversation between Lewis Bear, Jr. and Maria Goldberg featured in the exhibition catalog, Lewis talks about the many ways in which current artists like Banksy and Mr. Brainwash continue to reference early pop art,” Wall said. . “His collection illustrates how generations of artists have recycled and appropriated concepts and themes to continually advance and challenge the boundaries of fine art. The exhibition provides a close look at these intergenerational relationships.

Iconic pieces, including Warhol’s portrait of Marilyn Monroe, appear throughout the gallery, remixed and reimagined over several decades. The works on display create a visual language that has become part of our culture and continues to be referenced in new ways.

One artist whose works are featured in “Vandals to Vanguards” is Jeremy Novy, a San Francisco-based stencil artist known for his koi fish stencils and queer visibility efforts. Hailing from Wisconsin, his stencil work began as a form of interventional street art aimed at repairing urban blight.

“I lived in the Midwest and saw that when the industry moved out of cities, shuttered homes usually followed,” Novy said. “This loss would leave a huge horror in the area, causing severe mental repercussions on the residents. I felt that a cartoonish stencil of a door and window could draw attention to this problem and could serve as an escape from fear.

Novy says that while the city of Milwaukee saw only punishment and negative reinforcement could solve a problem, it saw how art could be an alternative path to a solution. When he moved to San Francisco in 2008, he became interested in queer visibility.

“I noticed the lack of diversity and representation in graffiti and street art culture,” Novy said. “I started to think more deeply about queer representation in street art and murals. The murals were meant to empower a certain demographic – we have murals for immigrants, union workers, cities, counties, people with disabilities and people from different countries – but we didn’t have queer murals or even a rainbow crosswalk. I made it my mission to raise queer visibility in protest, everything often speaking publicly about this lack of representation.

At the exhibition’s opening reception, Novy painted two large, six-foot koi carp in the street outside the museum. He hopes it will bring joy and inspiration to the community.

“I’ve done my best to help people find everyday beauty and joy on their sidewalks – if only for a moment when they find a koi stencil,” Novy said. “It’s important because who wants to throw or not pick up their pet’s poop after seeing art under their feet.”

Although “Vandals to Vanguards” is comprised of works from multiple local lenders, contributions from Belle and Lewis Bear, Jr’s collection served as both inspiration and primary source material for the show.

“It’s really special to be able to highlight these connections through examples from local collections and shine a light on international movements through the rich cultural heritage of our own city,” Wall said. “I hope visitors will gain a new appreciation for how pop and street artists have looked outside the traditional gallery system to create new art forms that have become so mainstream that their images are an integral part of our popular culture and continue to influence artists today.”

“Vandals to Vanguards” will be on display at the Pensacola Museum of Art until January 8. The museum is open Tuesday to Saturday from 10 a.m. to 4 p.m. and Sunday from noon to 4 p.m.

For more information on timetables or ticket prices, click on here.