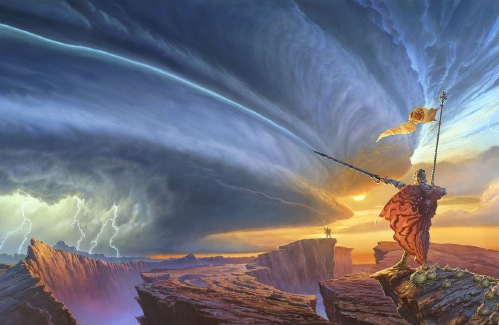 The Recorder – Worlds That Could Never Light Up At Rockwell: Fantastic Images From 1589 To The Present

They need it just as they need air.

The stuff of dreams – demons, angels, heroes, heroines, dragons, knights and princesses await, their images dominating the galleries of the Norman Rockwell Museum in Stockbridge. Until October 31, you can see 140 works by 100 artists, some of them centuries old, all conveying illusions, mysteries, and every culture’s passionate desire for fantasy illustration.

â€œFantasy is important,â€ Jesse Kowalski noted in a recent video, â€œbecause humanity has a natural desire for ascension, a need for ritual, and a need for self-improvement. ”

He is the museum’s curator, known for presenting unique exhibits such as the work of cartoonists William Hanna and Joseph Barbera (“The Flintstones, etc.”) and the first major exhibition of the illustrator and author’s work. from Hampshire County, Tony DiTerlizzi.

By creating “Enchanted: A History of Fantasy Illustration” and publishing its eponymous 232-page accompanying catalog (Abbeville Press; $ 45) the curator has cast a wide net.

He researched heroic legends ranging from “The Epic of Gilgamesh”, an epic poem written in 2100 BC. Among other books, Kowalski looked at the collected works of psychoanalyst Carl Jung, who wrote on â€œthe gray mists of Neolithic prehistory. Mankind has never lacked powerful images to provide magical aid against all the strange things that dwell in the depths of the psyche.

â€œ(Fantasy) is a human need that helps explain who we are and clarifies our place in the world,â€ Kowalski said.

Legends are everywhere. The national animal of Scotland is the unicorn, and in Iceland, a survey concluded that the majority of the population believe, or think possible, the existence of elves. The “huldufolk” (hidden people) can be found in the Viking archives of 1000 AD. In this country we also have many myths: Bigfoot, Diets, Hollywood and the Lottery.

Kowalski also read the writings of Joseph Campbell, whose career has been devoted to the study of mythologies and comparative religions. The author is best known for suggesting that every culture has a pervasive â€œheroâ€ myth. This character sets out on a journey that defies his being, but he overcomes all obstacles to come back more powerful, often to save his community.

By organizing this first large-scale original exhibition of fantastic art and illustration, Kowalski wisely excluded guns, technology, and spaceships. Fantasy, he noted, is a world that could never exist, while science fiction is based on fact.

Rich Bradway, the museum’s director of digital learning, organized a tour of the galleries. He said that Kowalski, when planning the exhibition, knew that “fantasy art doesn’t start in 1970, it dates back to Greek mythology”.

In the first gallery you will find a dramatic depiction of “Apollo slaying the python”, rendered in black ink and wash from 1690 by the Dutchman Willem Van Miers. The Greek poet Ovid describes the reptilian rumble, noting that the dying monster was “pierced by a thousand arrows”. Here we have four more economical arrows, but the winged beast is no more and Apollo has acquired real estate in Delphi. Over the centuries the myth has gained popularity among sculptors and painters and in these galleries you will find that dragons and winged snakes remain very popular and frightening.

Also influenced by the words of Ovid, the Dutch master engraver Hendrick Goltzius engraved in 1589 “Creation of the four elements”. It is energetic work in which a muscular deity, centered on a crescent of fire, brings to life a swirling earth below.

Bradway explained that an original idea was to have a touchscreen in a smoky spherical shape suggesting a witch’s cauldron. It would provide a wealth of information on art and artists. Since last year, however, most of us have put a lot of â€œtouchy-feeliesâ€ on hold.

â€œWhen COVID happened, we pretty much denied that concept,â€ the director said. He added that the exhibit may have been much larger, however, with all of the museum and private contributions to the exhibit, the costs of transportation and insurance have become complex.

â€œWe had to cut it down,â€ Bradway said, â€œbut it’s still one hell of a big show.â€

Steps from Apollo’s Arrows is a century-old NC Wyeth painting “Bruce on the Beach,” in which medieval swordsmen Robert the Bruce and William Wallace shake hands before joining in the battle. Other ‘golden age’ illustrators are here in abundance, from Howard Pyle and Max Parrish to Jessie Wilcox Smith and Arthur Rackham. The brilliantly brilliant diary design also caught Kowalski’s interest and you will find black and white panels of a surreal 1906 Winsor McCay’s “Little Nemo” and Hal Foster’s elegant “Prince Valiant”.

In modern times, the 1977 bestseller “Faeries” by Brian Froud and Alan Lee has provided a comprehensive field guide to these magical dwarves, sparking a renewed interest in romantic and illusory characters.

Froud went on to create, among other projects, costumes and concept art for films such as “The Dark Crystal” by puppeteer Jim Henson. Lee, also wanted, was the concept artist for “The Lord of the Rings” and the Hobbit movies. Examples of their work are in the show.

â€œIf you were to try to create a line in the sand,â€ Bradway said, â€œwhen did fantasy art come to the forefront of popular culture, I would say Frank Frazetta was one of the ancestors.â€

The late artist has enjoyed a meteoric rise, catching the attention of film producers after he taunted Beatles drummer Ringo Starr for “MAD” magazine. He had started as an inker for comics and had grown to create movie posters, record cover designs, magazine illustrations, and a plethora of science fiction book illustrations.

There are two of her paintings here and an oil from 1972, “Escape on Venus” depicts a muscular woman who caught the eye of a hungry tiger. Frazetta often portrayed the woman as strong and independent and at times tottering on the optional border of clothing. The artist played a key role in popularizing images from “The Hobbit” and “The Lord of the Rings”.

You’ll also find artwork by Tim and Greg Hildebrandt, who produced calendars for this latest classic and concept art by Tolkien for the first ‘Star Wars’.

It is said that Hollywood is always chasing images from the past. Briton John Martin was obsessed with biblical catastrophes and the Underworld. In the 1820s he created several images for John Milton’s “Paradise Lost”. His dramatic take on “Satan in Council,” a lone figure atop a sphere in a cavernous arena, was the inspiration for the Galactic Senate in a 1999 Star Wars film.

You yourself may be inspired by the works and career of Julie Bell. She had worked in book illustration, later posing as a model, then becoming a nationally ranked bodybuilder and competitor. She then returns to illustration and creates virtually photographic images in oil. “Pegasus Befriends the Muses” from 2018 is a masterpiece of female form riding on a winged horse surrounded by swirling colors. She is the mother of artists Anthony and David Palumbo. Examples of their works are also in the exhibition.

The images range from the comic to the grave. The centerpiece could well be Gustave DorÃ©’s 24-square-foot painting “The Black Eagle of Prussia”. A winged and wounded woman, representing France and guarding her war dead, is defeated with a broken sword as a huge voracious bird descends on her. The image defines the artist’s fears about the future of France during the Franco-Prussian War of 1870.

Ironically, in 2014, David Palumbo created an oil image “The Fallen”, showing an armored and exhausted woman, sword in hand, guarding the dead of World War I.

The artist was unaware of DorÃ©’s previous image and upon seeing it Bradway said Palumbo was inspired by awe, while also being surprised that his vision was not original.

Elihu Vedder’s Sea Serpent’s Lair was on loan from the Museum of Fine Arts, Boston in 1864, an image so subtle that people often pay little attention to the painting, seeing it as mere landscape. Coiled up in the dunes is a nightmarish reptile. Using the same title, in 2019 Justin Gerard painted a huge, horrifying horrible snake in the depths, entwined among the wrecks of colonial-era wooden ships. To paraphrase a quote from John Steinbeck: “It’s good that we have our monsters in the depths, otherwise the oceans would be like a dreamless sleep.” ”

â€œEnchanted: A History of Fantasy Illustrationâ€ continues through October 31. Museum opening hours: Thursday to Tuesday. 10 a.m. to 5 p.m. Closed on Wednesdays. Admission: Adults, $ 20; students, $ 10; 18 and under, free. Important: A repair of the bridge is in progress. If you are traveling on Route 183, take the detour on West Hawthorne Road to Stockbridge. Signs will direct you to the museum.