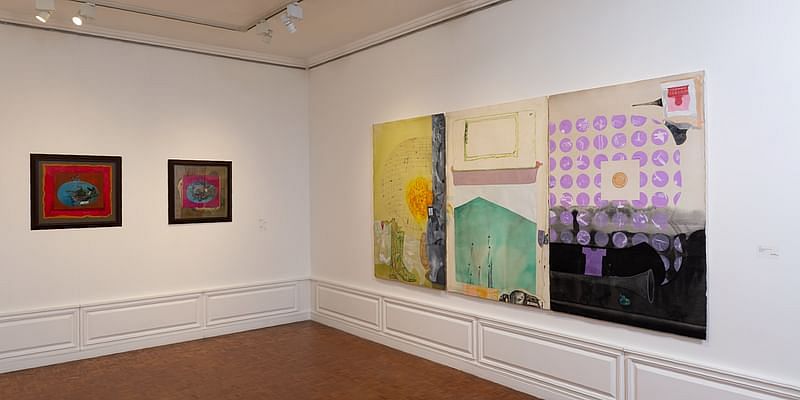 This surreal art exhibition explores the intersection between illusion and reality

The free dictionary describes “miasmatic” as “a foul-smelling vapor from decaying organic matter once thought to cause disease.” From where, ‘Miasmatic’, the latest art exhibition by the Vadodara-based artist Anandajit Ray currently on display at Vadehra Art Gallery (VAG) in Delhi, relies heavily on the uncomfortable imagery of life.

â€œIn Miasmatica, Anandajit Ray uses general aspects of his surroundings with a humorous but intense perception. He is interested in the pictorial representation of the intersection between the illusions of thought and the reality of vision, drawing on his awareness of the boundaries between external events and internal imprints â€, Roshini Vadehra, director of VAG.

Although displayed to the public only after the two disastrous waves of the COVID-19 pandemic, the works in this exhibition have nothing to do with the disease that has dominated the world for a year and a half.

Anandajit explains: â€œThe title of the exhibition ‘Miasmatica’ is the general feeling of unease that is often experienced and not the result of the pandemic which followed closely after the work was completed. It is simply a coincidence. “

The 27 of his works on display were completed between 2011 and 2019 and had arrived at the gallery in early 2020 for imminent display. However, the show has only just been put on as the threat of another wave abates.

‘Miasmatica’ consists of three separate works by the artist. The first of these is a series of paintings entitled “Peripheral vapor”, where Anandajit turns to Indian miniatures for structural inspiration. However, staying true to his signature style, he doesn’t dwell too much on the figuration, choosing instead to focus on the artistic translation of the violence and anxiety caused by a general void of feelings.

The second body of work has been baptized “Pseudo-pathogens”, and consists of a series of miniature paintings that mimic scientific, botanical and zoological drawings, albeit in its own artistic way.

The third set of Anandajit in this exhibition is called “Exercise on the behavior of brushes”, which takes a frank look at the very nature of painting. â€œIt’s paint for the sake of painting – in which we feel the amplification of the theme caused by a questioning of the medium,â€ Roshini shares.

Collectively, ‘Miasmatica’ is an interesting study of contrasts. Anandajit is also adept at the intensive use of color in the “Peripheral Vapid” series, as he is also of the sepia darkness of his “Pseudo Pathogens” works. In addition, he adapts to both large and small mediums – his largest paintings presented in this exhibition are the set titled “Ennui” (watercolor and gouache on paper 60 x 40 inches each) and his smaller ones belong to to the “Pseudo Pathogen” series (watercolor and gouache on 9 x 12 inch paper).

Born in 1965 in Kolkata, Anandajit obtained his bachelor’s and master’s degrees from the Faculty of Fine Arts of Maharaja Sayajirao University in Vadodara. He has participated in several individual and group exhibitions. The most recent are those which took place at Gallery Espace in New Delhi in 2007, Aicon Gallery in New York in 2009, Grosvenor Vadehra in London in 2010, Pundole Art Gallery in Mumbai in 2011 and 2017, Art Chennai in Chennai in 2012 , Lalit Kala Akademi in New Delhi in 2014, Jehangir Art Gallery in Mumbai in 2014, and Gallery White in Baroda in 2018. He was awarded the Elizabeth Greenshields Fellowship in 1991.

Anandajit calls himself a “surface painter” because he believes that his work does not inflict judgment on the subject he is painting. He frequently scatters acts of violence in his works which can also be seen as decorative details, making them more acceptable to the public.

It is inspired by the naturalistic style of George Stubbs and the Mughal painter Mansur as well as the fantastic imagery of Hieronymus Bosch and the Dutch master Pieter Bruegel. As such, the paintings of Anandajit offer a dark and grotesque vision in which “the real and the unreal coexist”.

Inanimate objects, pop art images, flora and fauna are generously enamelled with his watercolor and gouache creations on paper, drawn with the delicacy attributed to a miniaturist against a background of surrealist art. He often works with the human body as a medium to express his â€œhallucinatory bioscapes with disembodied faces, noses, eyes, limbs and shoesâ€. Some of his works rely on a cut-and-paste technique to construct elaborate geometric collages.

Founded in 1987, the Vadehra Art Gallery has made a name for itself in the Indian art world. The gallery represents a roster of artists spanning four generations, including modern masters like MF Husain, Ram Kumar, SH Raza and Tyeb Mehta, which were an integral part of the years of founding of the gallery.

They also have collections from the next generation of modernists like Arpita Singh, Gulammohammed Sheikh and Rameshwar Broota. Their contemporary program includes renowned names in Indian art such as Atul Dodiya, Shilpa Gupta, Anju Dodiya, Nalini Malani, NS Harsha and Praneet Soi, among other young emerging talents.

The VAG has collaborated with the National Gallery of Modern Art in New Delhi and Mumbai, and the Kiran Nadar Museum of Art in New Delhi to produce landmark exhibitions on Indian art, and has loaned and supported exhibitions to the Guggenheim Museum in New York, at the Kunstmuseum in Bern. , Chicago Cultural Center, Asia Society in New York, Peabody Essex Museum in Boston, the Serpentine Gallery in London and the Mori Art Museum in Japan.

â€œAs a key artistic interlocutor with the Indian public, we expanded our exhibition program in 2007 to include important names from the international contemporary art scene. Since then, VAG has exhibited works by important international artists, including Yoko Ono, Wolfgang Laib, Bernd and Hilla Becher, Francis Bacon, Lucian Freud and Karl Blossfeldt, â€explains Roshini.

The gallery also embarked on publishing in 1996 and has published over fifteen books and hundreds of illustrated exhibition catalogs and artist monographs, in addition to table books, children’s picture books. and an art repertoire. Since 2010, VAG has collaborated with international publishing houses Prestel and Penguin to produce monographs on Indian artists.

Anandajit Ray’s personal exhibition titled Miasmatica is on display at the Vadehra Art Gallery of Defense Colony, New Delhi, until September 30, 2021. The gallery is open Monday through Saturday, 10 a.m. to 6 p.m., and entry is free. All works are for sale but prices are shared on request.

â€œWe are happy to welcome visitors to the gallery, where we apply all security protocols. For those who are not comfortable visiting under the current circumstances, an electronic catalog is also available on request. For all inquiries, please write to us at [email protected] â€, sign Roshini.

YourStory’s flagship startup and leadership conference will be virtually back for its 13th edition from October 25-30, 2021. Sign up to receive updates on TechSparks or to express your interest in partnerships and speaker opportunities . here.