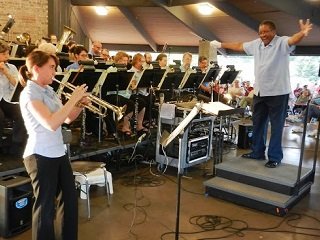 What to Do in Madison This Week: The Fireworks Continue, Capitol City Band, and More Isthmus Picks – Isthmus

Monona Community Festival, until July 4, Winnequah Park, Monona: A great place to catch fireworks is the annual Monona Summer Festival, which ends with the sky above Winnequah Park lit up dramatically at dusk on July 4th. The festival includes the expected carnival and beer tent, and the final day includes the VO5 musical headliner, an art fair, and Wisconsin’s only Wife Carrying Championship (note that the person carried may be from any gender, provided she is over 21). Find the complete program on mononafestival.com.

Catfish River Music Festival, until July 4, Rotary Park, Stoughton: Charlie Parr, Dead Horses, Davina & the Vagabonds and 15 other artists, outdoors, for free? Sign us up. The Catfish River Music Festival returns for the first time since 2019; this is an annual fundraiser for the Stoughton Opera House Friends Association, and drink sales go towards maintaining and operating the historic venue (along with any donations, enthusiastic music fans are happy to help cause, clue). The final day’s lineup begins at noon with acoustic duo Cosmic Strings and ends with the one-two punch of Parr and the aforementioned rockers Wurk. Find the complete program on catfishrivermusicfest.com.

4th of July Community Celebration DeForest, until July 4, Fireman’s Park: Few communities here celebrate the 4th of July quite like DeForest. The small-town vibe of this three-day festival hosted by the DeForest Windsor Area Chamber of Commerce will have you feeling like you’ve traveled back in time to simpler days. On Monday, there will be a Freedom Run (7:30 a.m.), parade (10:30 a.m.), Elvis-themed variety show (11:30 a.m.), activity booths and bingo (noon), Tribute to Veterans (2 p.m. ) and music by the cover band SuperTuesday (7 p.m.). The fireworks, headlining the weekend, begin Monday at dusk.

Stoughton Fair, until July 4, Mandt Park, Stoughton: This non-profit community event remains very 4-H and FFA focused, featuring community youth and livestock and other exhibits throughout the extra-long weekend. Activities are mostly over on the last day, but the carnival is open and there is a mini rod and truck and tractor at noon. Oh, and of course, the big shebang from a closer, fireworks display at dusk. Find more information about Stoughtonfair.com.

Very Asian week, until July 8: This event highlighting the Asian community of the territory, presented by the Very Asian Foundation and madison magazine, places particular emphasis on food. During the week, participating Asian restaurants and food businesses will donate part of their recipes for specific dishes to the Very Asian Foundation. The week also includes a paid event Thursday, July 7, at The Spark building, featuring networking and vegetarian japchae noodle appetizer by Chef Tory Miller at 5 p.m., followed by a 6 p.m. discussion by Michelle Li, Alice Choi, Tory Miller, Francesca Hong, Mike Moh, Gabe Javier and moderator Charlotte Deleste on what it means to be very Asian and very American.

Capitol City Band, Monday 4 July, Rennebohm Park, 6.30 p.m.: The Capitol City Band’s concerts in the park are back, kicking off for the summer season fittingly on Independence Day with its season opener, Tribute to the Troops – Then and Now, featuring patriotic music and the Black Knights Color Guard & Auxiliary, of VFW Post 7591 The all-volunteer group’s mission is “to help heal the nation, one note at a time.” (In that case, expect a very long concert.) The band’s weekly concerts on Thursdays will take place at 7 p.m., from July 7 to August 7. 25. More info on www.mmqccb.org.

Quintet by Sam Robinson, Tuesday, July 5, Bur Oak, 8 p.m.: Rampant hard bop traditionally puts the saxophone front and center, but Sam Robinson makes it work, then some with his high-octane trumpet playing. That said, expect plenty of power from the tenor sax. Scott Angst is the reed player of this set and collectively they will show Madison why they regularly fill jazz clubs and delight audiences all over Chicago.

The Melvins, Tuesday July 5, High Noon Saloon, 8 p.m.: Sludge-metal/proto-grunge pioneers The Melvins hit the road for “The Electric Roach Tour,” their first headlining tour since 2019. Last year, the trio released two albums: Work with Godwhich brought together an early incarnation of the band from 1983, and five legged doga 36-song acoustic set that spans the band’s back catalog since 1987 Gooey Porch Treatments to 2017 A walk with love and death. This show is sure to prove why The Melvins (whose three members are now in their mid to late 50s) remain one of rock’s hardest working bands. Starring Helms Alee, Harsh Mellow.

Phil Porter Reception/Exhibition, through July 29, ARTS for ALL Wisconsin: Are you lucky enough to have invested in a Phil Porter? Porter, a well-known visual artist from Madison’s art scene, painted what he saw around him with exuberant colors and loose, vibrant strokes. Favorite subjects included Willy Street, the State Capitol and the Red Gym. Porter died in January at the age of 75. A new sun in the sky, on view through July 29, is a retrospective exhibition of Porter’s work, beginning with early and previously unseen images through late works, and many will be for sale, benefiting ARTS for ALL Wisconsin. Porter “embodied our mission and he leaves behind a legacy that will be celebrated for a very long time,” said Christina Martin-Wright, executive director of ARTS for ALL Wisconsin.

A visit to the vegetable garden, Wednesday, July 6, 2022, Allen Centennial Garden, 6:30 p.m.: Wisconsin Food History Buffs (better known as CHEW) is taking a field trip for tonight’s monthly meeting. Did you know that the Allen Centennial Garden on campus has a vegetable garden full of plants used in the kitchen? Reba Luiken, Garden Manager, will showcase Hmong soup herbs and African Diaspora cultures, among other vegetables and herbs. This event is free and open to the public but confirm your presence via this Google form.

Abel Contemporary Gallery exhibits, until July 17, ACG, Stoughton: Three new exhibitions are coming to Abel Contemporary, one of the most interesting galleries around Madison. In prints, Illinois artist George Shipperley creates large-scale, transformative works with oil pastels, the creamy drawing medium that may resemble colored pencils but has been elevated to fine art by society Sennelier specifically at the request of Pablo Picasso. And two faculty members of UW-Madison’s furniture design and woodworking program, Katie Hudnall and Tom Loeser, have a joint exhibit titled boxing match, which will surely transform your concept of wooden boxes. A collective exhibition, The Aviaryis hosted by Craig Clifford.

One of the Boyzz, Thursday, July 7, roof of the Monona terrace, 7 p.m.: Self-described “roadhouse style,” this band’s name is literal: it includes Dan Buck, a member of northern Illinois hard rock legends The Boyzz. The rest of the members of One of the Boyzz are also veterans of the Chicagoland scene; the band are building on their former incarnation as Cool Rockin’ Daddies, playing classic rock and soul covers (and maybe a few originals along the way). This is the last show in the Monona Terrace Concerts on the Rooftop series, with trivia at 6 p.m. before the concert; find free tickets here.

We hope it is convenient for you to find selections grouped together in one article. Individual picks can still be found in the usual places online: collected hereand sprinkled everywhere all events.

Note: Many locations and businesses may continue to maintain individual mask-wearing requirements, along with proof of COVID-19 vaccination and/or a negative entry test. Before attending an in-person event, confirm that it’s still happening and check attendance guidelines on relevant company websites or social media accounts.