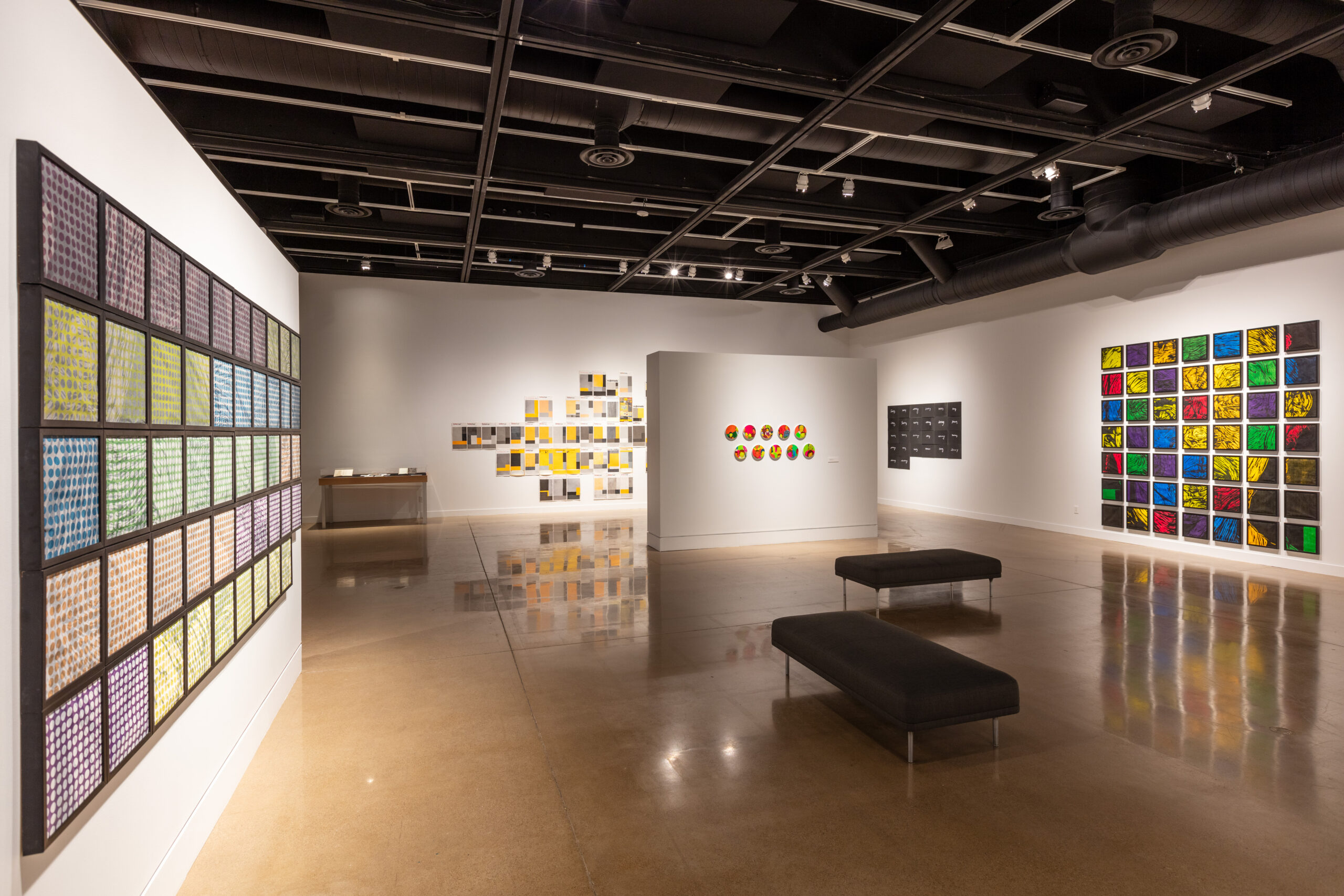 The Kansas Reflector welcomes opinion pieces from writers who share our goal of expanding the conversation about how public policy affects the daily lives of people across our state. Emily Christensen is a Wichita-based journalist who writes about arts and culture.

Wichita-based artist Ann Resnick has been reading obituaries for as long as she can remember. Their “strange language” fascinated her, and eventually she began to incorporate the notices into her work.

“I want to find a way to talk about grief and loss, love and death,” she says. “The use of the obituary pages seemed quite straightforward.”

Grief and loss, love and death are the themes of ‘Chapter and Verse,’ a solo exhibition of Resnick’s work at Wichita State’s Ulrich Museum of Art, on view through May 7 . The show includes 16 major works from the last 30 years of the artist’s prolific career, and it should cement Resnick’s reputation as an intelligent and methodical observer of the human condition.

In the words of curator Ksenya Gurshtein, “She is a pain data analyst.”

Resnick’s work with obituaries is represented by “Our Town.” She created the 36-foot-long piece over a two-year period, first coloring obituaries of the Wichita Eagle, then painstakingly burning them into a striking web-like pattern. The result, writes Gurshtein in the exhibition text, evokes “both the foliage and the shifting patterns of light seen when looking at the shadows cast by the plants.”

“The thing about journals is that’s where the content is for the work I want to do,” Resnick says.

She still subscribes to the newspaper for the same reason that she buys 200 stamps at a time from the post office.

“I just try to support old institutions,” she says. “I think it’s the ties that bind, in a way.”

On the other side of the gallery is another room that uses newspaper as a medium. “Pessimist’s Index” consists of the first 67 newspaper pages representing several weeks in 2015. Resnick and a list of friends color-coded the pages according to their relative pessimistic content. She made this piece in response to an installation by Christine Wong Yap at Harvester Arts.

“His work was about optimism, and I was like, ‘That’s not me. I’m going to take the opposite view,'” Resnick says.

In contrast to the complex and orderly nature of “Our Town” and “Pessimist’s Index”, two simpler works carry different emotional weight. “Dear Ann, Love” and “We’re So Sorry” extract and enlarge words from handwritten correspondence in large black and white series. Here, as in much of his work, Resnick draws inspiration from his own life to create art that feels expansive rather than specific.

She created “We’re So Sorry” from sympathy notes received after the 2018 death of her husband and creative partner, artist Kevin Mullins. Most of us have been the audience for a chorus of “sorry”, though – and the fact of that is impossible to ignore when viewing this piece.

“Pessimist’s Index,” “Dear Ann, Love,” and “We’re So Sorry” allude to Resnick’s community and the collaborative nature of some of her work. The process of creating the exhibition was another form of collaboration. It started early in the pandemic, after Resnick spoke with Gurshtein, the curator, in preparation for a public conversation.

“That’s when I realized there was so much more than I knew” about Resnick’s work, given that it had been shown relatively little in Wichita, Gurshtein says. “I felt that this work from all these different stages of his career should be shown in dialogue together.”

Working with Gurshtein, Resnick spent months reviewing decades of work accumulated in his studio near downtown Wichita, unrolling and unpacking pieces that hadn’t been seen in years.

“It was mind-blowing in so many ways,” Resnick says. “The project required me to go through 40 years of work.” The process of looking back on one’s life in this way was “equal parts pain and pleasure”.

Both the artist and curator were keen to include series of older prints, created prior to his 1995 move from upstate New York to Wichita. “Jeannesplice” and “Jeannetic Mutation”—references to Resnick’s mother, Jeanne—use partial representations of the Resnick siblings’ faces to explore the random and sometimes confusing nature of genetic connections. In these pieces, Gurshtein sees a direct line to Resnick’s recent and meticulous work.

The curator wanted the exhibition to reflect the different phases of Resnick’s career and the wide variety of media she used. However, “Chapter & Verse” isn’t exactly a retrospective, but rather a focused look at some of the artist’s recurring themes – Gurshtein notes that they could have selected different works to evoke an entirely different tone.

This choice makes “Chapter & Verse” a bit like an unassembled puzzle: each of the works corresponds to the others. It may take a while for the viewer to recognize these connections, but they are everywhere.

A display case containing the artist’s project notebooks and sketches provides context for Resnick’s style of practice and the works included in “Chapter & Verse.” A online gallery that accompanies the exhibit includes additional images that highlight Resnick’s time and thought processes.

“I feel like that’s a really core thing that defines her as an artist, and that’s not that common in artistic practices — that intense commitment to investing time,” Gurshtein said. “Obviously spending time is a big part of the whole point of creating the work.”

The unusual engraving technique used to create four of the pieces in ‘Chapter & Verse’ is itself a concession to the inexorable forward movement of time. An engraver by training, Resnick discovered that burning paper imparts a line quality similar to that of a woodcut, without the same level of physical effort required to carve blocks of wood. That’s a definite plus for an artist with carpal tunnel and a history of broken wrists.

Still, she can only work for about three hours at a time, she says: “Everything takes its toll, even when you think it won’t.”

The Ulrich Museum of Art is open to the public from 11 a.m. to 5 p.m. Monday through Saturday. Free entry.

“Squeeze Pinch Smoke: Prints & Drawings 1986-1992” can be viewed at the BildLab gallery in the Fisch Haus by appointment until April 17. Free entry.

“So Long Farewell” opens March 3 at Newman University’s Steckline Gallery at DeMattias Fine Arts Center. Resnick will give an artist talk at noon on March 3 in conjunction with Newman’s annual Art and Lit Fest. The gallery will host a reception on the first Friday from 5 to 8 p.m. on March 4 and the exhibition will be on view from 9 a.m. to 4 p.m. Monday through Friday and by appointment until March 25. Free entry.

Through its opinion section, the Kansas Reflector works to amplify the voices of people who are affected by public policies or excluded from public debate. Find information, including how to submit your own review, here.

Parent of today: Curtis closes the door on a 75-year-old real estate business