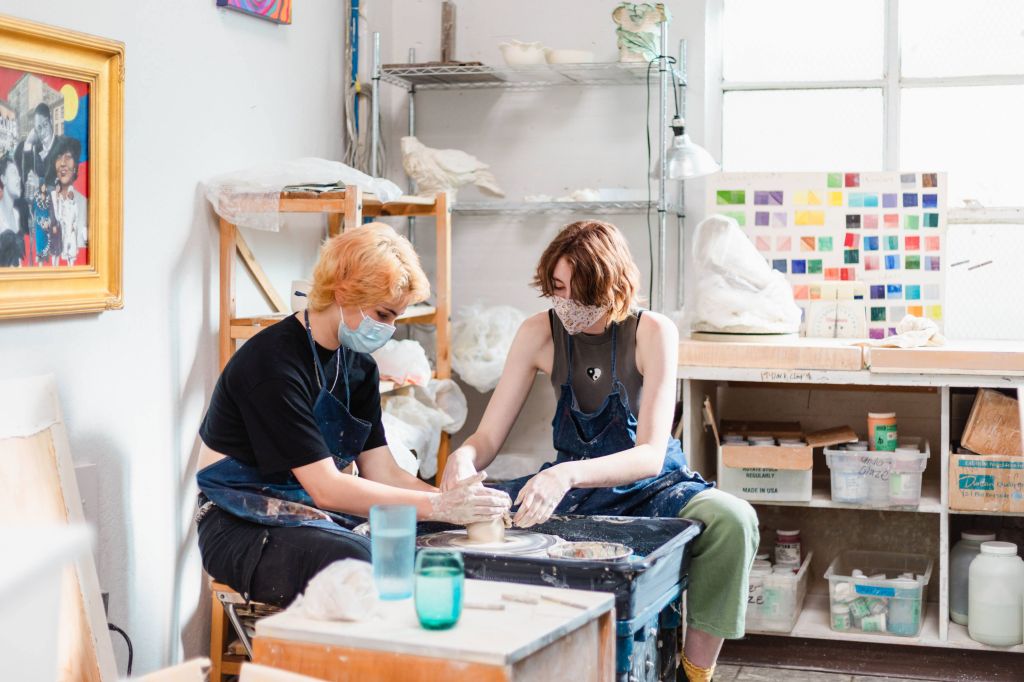 When artists Marcia Perry and Meg Biddle created the Youth Arts Collective in Monterey, they did so with a deep belief in the need to provide a haven where teenagers could relax, eat snacks, learn to make art and being kind. Although they were clear about their purpose, they could not have imagined the extent of their service, the extent of their reach in the community, or the success of their nonprofit organization, measured by creative children. who thrive.

After 23 years and an investment in over 1,000 young artists, countless art exhibitions, fundraisers and creative hours ─ plus community support and engagement, including artistic mentorship by artists established locals ─ Biddle and Perry have made a difficult but “desire-based” decision to hand over the paintbrush to a new artist duo who will take the reins of YAC.

“We knew this day would eventually come,” Perry said. “We founded YAC, but we are not YAC. It’s much bigger and wider than when we started. Our goal then and our current vision is for it to continue into the future.

It started around the turn of this century, when community members complained about teenagers congregating after school on the streets of downtown Monterey. Idle minds and idle hands might, after all, be in trouble. It was like the Carmel of the 1960s, when city elders assumed that hippies hanging out in Devendorf Park would damage the quaint spot and its reputation. They really wanted them to be collected and deleted. Nearly 40 years later, artists Biddle and Perry saw it differently.

“Our own kid was still in middle school,” Perry said, “but the kids hanging out on the streets were our kids, on our streets. Where do they have to go? We didn’t have enough after-school programs, especially in the realm of the arts, where children could find themselves safe, productive, nurtured, expressive, creative and valued.

Biddle, draftsman, illustrator, painter and author, and Perry, painter, illustrator and sculptor, accustomed to working in their Monterey home, were also accustomed to a parade of people who came to visit, see what they were doing, seek advice, rummage through their fridge. It wasn’t a big leap to imagine creating an organization where teens could congregate, grab a snack, and explore ways to express themselves in a physically, mentally, and emotionally safe space.

“We wanted to provide a place for kids from all walks of life,” Perry said, “where we could provide a desire-based education, focused on what the student wanted to do on a given day, and be there to help. They could developing their skills, their desires, their art, without judgement, it would get them off the streets, while building their creative confidence.

The children are in school all day out of necessity, being told what to do, how and when. This, says Biddle, would be a clubhouse, a community of children, not a school.

They formed a board of directors, created a 501(c)(3) they called the Youth Arts Collective, and opened their doors on January 15, 2000, Martin Luther King’s birthday, with a dream similar.

Within weeks, the name was culturally shortened to YAC, and the countless kids who’ve been there know each other as YACsters. And Perry, an earth mother, airbrush artist, was now executive director, while Biddle, a cartoonist, took on the role of program director.

Twenty years ago, Jesse Juarez, now 40, was YACster. Today, the artist, who has worked in acrylic, oil and pastel, but particularly ink and line drawing, is the new general manager of the YAC. Marissa Serna, 38, who started at CSU Monterey Bay as a biology student and started with a degree in visual and public art, is YAC’s new program director.

“Over the past five to seven years, people, primarily our board members,” Perry said, “have been asking about our potential succession plan for YAC. Of course, we had thought of that. Wondering who should replace me as Executive Director, like almost every decision I’ve made, came to me intuitively when Jesse’s face came to mind.

Juarez was YAC’s first intern, the first child they gave the key to the studio. He made his first donation to YAC as soon as he joined their board. Her career trajectory has included community theatre, as well as digital and manual fine arts.

Understanding the requirements of the role, Biddle and Perry asked Juarez and his wife, Kelsey, to carefully consider the position.

“It took a while to sink in,” he said. “Executive Director. Marcia’s role. Thank goodness my wife was there to help me absorb that.

Then they asked Marissa Serna, who had also served on their board, to become program director.

“I was in my car,” Serna said, “after an emotionally draining day. I had just resigned from the Boys & Girls Club, after 14 years. I had graduated teaching from CSU East Bay and I knew it was time to grow in a new direction. I didn’t want to give up teaching or the arts. With that call, I knew I didn’t have to and I cried.

Biddle and Perry knew they needed someone with Serna’s skills to run the program. But they also needed an emotional response to know that they were making the right decision, that they had chosen someone who cared about them. Deeply.

“YAC is something that has driven and demanded our every waking and, at times, sleeping moment,” Biddle said. “When you’re asking someone to lead something so established but also so experimental, you need a disruptor. Both Jesse and Marissa are that. But we recognize that it’s also going to be disruptive. their life.

The dynamics of change

Retreating not downwards but sideways after more than 22 years requires some tweaking. Still, as Marcia Perry and Meg Biddle prepare to hand over their roles in December, they aren’t actually leaving the organization.

“Meg and I will continue to be artist mentors,” Perry said, “along with our other artist mentors. There’s no divorce here. For the kids, the YACsters, their family comes from s ‘expand. Students don’t know and don’t need to know all the details of what it takes to make this organization work. This is a carefully considered and thoughtful technical transition.

Part of this transition is orienting Juarez and Serna to the organization’s current structure and dynamics, empowering them to make their own plans and decisions for an organization that doesn’t need to be ‘fixed’. , says Perry, but continuously developed.

“The founders of an organization do everything, wear all the hats,” Biddle said. “So we had to deconstruct and define our jobs for Jesse and Marissa.”

A year ago, the couple pulled the promotion from Biddle’s role as program director and hired Grace Khieu to take it on. They also hired artist Natalia Corazza, a graduate of the California College of the Arts, who spent six years as a YACster, as an administrative assistant and artist mentor.

Biddle and Perry are both relieved and thrilled that the organization they founded continues to thrive in the hands of a vibrant young staff and the community of artists and philanthropists who support it.

“YAC allowed me to love a lot and create something out of that love,” Perry said. “I really love children. I get such pleasure from seeing them feel better, smile and learn that they are able to create something out of nothing. When I get really old, I want to have a lot of stories to share. YAC gave me these stories. I feel so lucky to have been able to do this.

How You Can Score Random Cheap Stuff On GovDeals

Life Magazine and the power of photography